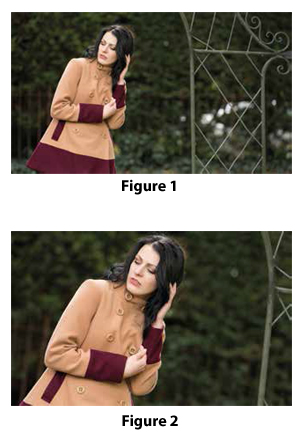 This edition of Posing Pouch looks specifically at generating movement and dynamics in our imagery. The reader might well think that in order to do this, their subjects need to be West-End dancers, Olympic gymnasts or similar but, as I have found, the opposite can totally be true with a little encouragement and creative thinking from the image-maker.

Movement and dynamics are effectively the same thing. In order to generate these, we need motion or the appearance of motion - either will do quite nicely, as long as the viewer is hoodwinked into assuming that movement or dynamics are taking place - even when it is actually not.

Firstly and most simple is to just tilt the camera. This is known as 'dynamictilt' and is commonly used to emphasise angles within an image and soadd a sense of motion. Compare Figures 1 and 2: 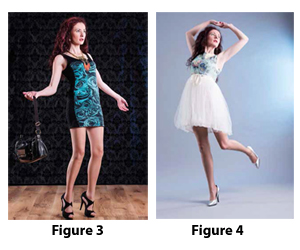 The next image (Figure 3) shows the model being directed in such a way as to simulate motion.

To start with, I asked her to simply go up on her toes and swing her hands behind her. This automatically put her in a balancing situation and the appearance of motion is evident. The protruding arms and the handbag add to the effect.

Progressing, I then asked her to imagine she had a basketball or netball and was shooting for the hoop (Figure 4).