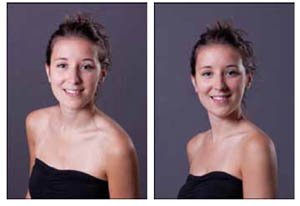 In Figure 1 we have turned the model's shoulders 45º away from the camera position. One shoulder is now nearer to the camera than the other and appears lower (although it is actually not). This is entirely due to shooting angle. Many articles written on this subject refer to the 'high' shoulder and the 'low' shoulder and these are clear to distinguish in Figure 1. However, when the shooting viewpoint is lowered (Figure 2), the high/ low shoulders can be more difficult to determine so, this article will refer to the shoulders as 'near' and 'far'. 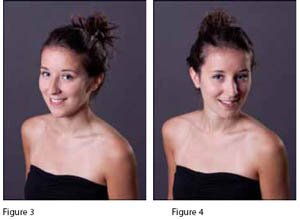 Figures 3 and 4 show the model turning her head first towards the far shoulder and then towards the near. For you lighting gurus, you'll instantly see a fast way to go from broad to short lighting but since this is a posing article, enough said.

If we lower the shooting viewpoint (Figures 5 & 6), we can see some big changes, most notably how much more of the neck is visible (the significance of which is discussed in a future article) and how the eyes have somewhat less impact. In Figures 3 & 4 the face is closer to the camera placing emphasis on the eyes; in Figures 5 & 6 the body is flatter on to camera, evening out the features.