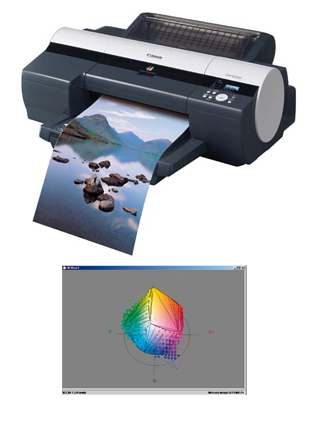 This is the first opportunity we have had to test the Canon wide-format, 12-ink printers and it came courtesy of DCP Systems when we visited their roadshow at Chester in April.

The 'Photo' inks are 1/6 of the density of the full tones. The data published by Wilhelm Research more than a year ago predicted a fade resistance of at least 100 years for colour, more for mono. As far as we know, these data have not been updated, which is a bit of a surprise. The ink delivery technology is bubble-jet rather than piezo and it is this which imparts the great speed to these printers. The 8000 put out an A3 onto a 44-inch roll in 291s and the 5000 put the same A3 print to a 17-inch roll in just 196s. 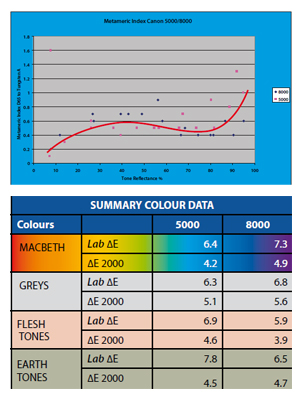 The gamut volume was computed at 916,915 using a profile for Ultra Glossy paper, obtained from the website. Comparing the gamuts of the Canon and the Epson 4800 (using Premium Glossy Photo Paper), the Epson has more gamut in the reds, oranges and yellow although the gamut only measured 877,148 on the same scale. The Canon has more reach into the greens, cyans and much more reach into the blues and blue-magentas, as might be expected from a printer with both red and blue cartridges (see image, right).

It is difficult to report accurately on the colour precision of these Canon printers. Neither was equipped with a bespoke profile and both were using third-party media (DCP's). The audit data are moderate but not outstanding for un-colour managed output; we are certain we could squeeze a lot more out of them. For the record the data are tabulated. In the all-important skin tones, the 5000 output was too pink and desaturated, the 8000 was a little too yellow and desaturated.