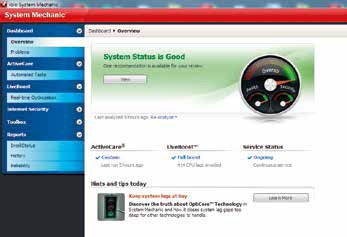 The crash times are also listed and we noted that the task scheduler was failing at 11:35am daily. However, this is where our detective work stalled; we could not find any task scheduled to start at that time (although there were many hundreds of tasks in the list). This investigation is thus ongoing.

Overall System Mechanic has dealt with the inevitable build-up of 'crapware', freed up disk space and provided a smiley face in terms of system performance. The machine performance has not significantly improved, the boot-up time remains so long that we pop into the office at home and start booting before breakfast so that it is ready for the start of the day on our return. The time is not that long providing you are not waiting to give out information on the phone (for example); making small talk with a stranger for 3m 45s is sometimes a struggle with your bank's call centre. Overall, booting the workstation has gone from 2m 6s as new, to 3m 10s after 12 months on Vista, and now to 3m 45s on Windows 7 (although it is a full 5 min before the disc stops hackling). For comparison, an old Macbook Pro laptop with an SSD starts in 14 seconds! 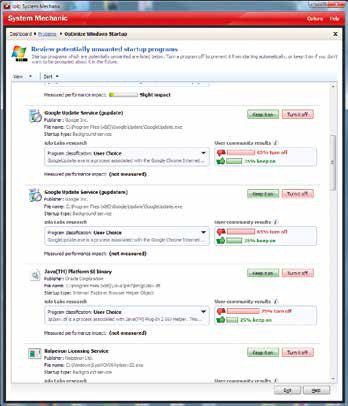 The jury remains out on Iolo; it has failed to locate the Task Scheduler failure yet and the system remains very slow compared with other systems and, in particular, the Mac systems. It is also worth noting that other suppliers are available (as they say on the BBC), some of whom provide free software. This then is not a recommendation to spend $24.95 but if you are at your wits' end with a slow system, it might just sort things out!

I tested Iolo System Mechanic 12's ability to whip a PC back into shape by performing two tests-running the Geekbench system performance tool and measuring boot times-before and after running the software to compare the computer's potency. Each test was run three times and averaged. Before Iolo scrubbed the system, the 2-GHz Intel Core i7 X990 Style-Note notebook with 4GB of RAM, and an 80GB Intel SSD drive achieved a 5,914 Geekbench score, and booted in 50.2 seconds.

After I used Iolo System Mechanic 11, I saw much-improved system performance: The GeekBench score rose to 6,254, and the boot time decreased to 44.2 seconds.

Impressive numbers, but SlimCleaner achieved a 6,338 GeekBench score and a 41.9 second boot time (tops among clean-up utilities we've tested). Check out the chart below to see how Iolo System Mechanic 12 fared against some of the competition.