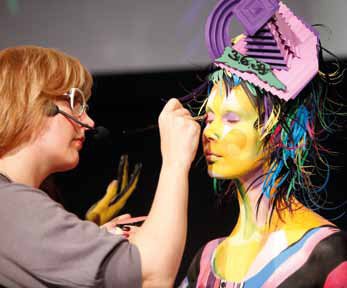 Body painting goes back a long way, certainly before formally recorded history. More recently (55bc to be precise) Julius Caesar's army allegedly came across a few painted early Britons, called them Picts and devoted a lot of time to bringing them to heel. We say allegedly because it is disputed whether they ever did splodge woad over their bodies and current thinking suggests it was not good stuff for body art anyways!

What is beyond dispute is the date your editor came across body painting. It was a model called Uta, she was painted by a lady called Melanie Mcgookin, she was photographed by a certain gentleman of repute, called McGillicuddy and the image was used on the front cover of Digital Photographer & Creative Imaging. The year was 2000 as far as we can tell, the magazine also featured the Olympus E10 - all 4 mega pixels of it!

Both cameras and body painting have moved on since those days and the topic was brought into focus by the arrival of a publicity piece about the Dusseldorf Make-up Artist and Design Show, more especially through the work of artist Natalia Pavlova. For the show Natalia recreated the style of her Kryolan calendar for 2011 when she did Picasso's Three Dancers onto the body of a (very) leggy model, on stage. Her 12 calendar images are shown on the next spread, along with a quiz for 'art-savvy' readers. You have to guess which painter inspired each month's image and if possible the name of the painting (answers in an email please!). To date we have failed to identify two of the inspiration sources. The top left has avoided detection by at least three audiences at seminars, as has the third. The Impressionist piece is also unidentified. Having looked at every Monet and Renoir in the catalogues we have been unable to find the 'red hat and opera glasses look' in anything. 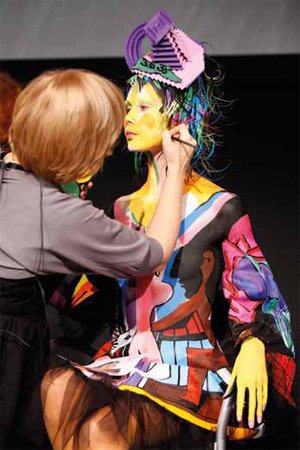 Make-up is a topic that most of our male members are unfamiliar with in any practical sense. For our female members, their knowledge of 'everyday' make-up will be of little use in photographic situations, less so for HD television make-up, and even less for the whole scale body painting such as that shown in this feature. However,, for those who have become skilled in the art, there are advantages to doing the make-up yourself. Not only do you save on hiring a make-up specialist - both their time and money - but you also have no instructions to deliver, you simply do the job exactly the way you want it (assuming, of course, that you have the same skill level - not a given!) Faye Yerbury is skilled at both make-up and hairstyling and the Yerbury images benefit from this generally, as well as it providing a good ice-breaker with a new or shy model.

Societies' member Clive Figes took it upon himself to learn make-up art for a variety of reasons and has created some unusual (and very successful) images. We therefore set about doing a Q&A session with him to learn more about the business.