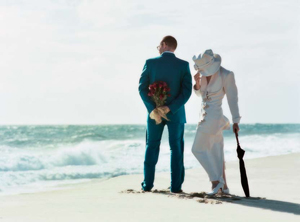 The following year, Denise became the first woman to win the illustrative/self-promotion category at the same awards. The manager of Fuji commented that he knew this opposition's product, Polaroid, well, but had never seen it used so creatively! These same images were subsequently accepted into the Fuji ACMP Collection in which only 150 images from the nation's best photographers are accepted for its annual publication.

Also in 1999, Australian Bride to Be magazine, asked the nation's top photographers to submit their favourite bridal image. The finalists from each Australian state were published and Denise's winning image was chosen by the readers themselves. The poignant image of Carolyn, shown here, touched the hearts of the readers and, appeared on the cover of the magazine. The published interview revealed to the readers that the far and away feeling in Carolyn's eyes was reflective of a recent family loss. This type of sensitive portrayal lies at the core of what motivates and drives Denise to continually improve her images. Although she draws immense joy from her work and accomplishments, she never seems satisfied at the level she has achieved and continually strives to do better by taking on more difficult assignments.

Wedding albums created by her studio reflect the refinement necessary for the educated and discerning clientele that she attracts. Denise manages to couple her creative talent with successful business acumen. She delivers her images in stunning presentations, most of which have been customdesigned by her so that the images, frames and albums she delivers are unlike any other.

Emails aside, Denise is also into 'e-motion'. Her background came from the motion-picture industry where she moved from in the late eighties, into the art of the single-frame image.

From a speed of 24 frames per second she slowed it down, chasing the sublime within a single frame.

"It's been a long journey," exclaimed Denise.

After a twenty-year sojourn as one of Australia's leading photographers she feels she has seen the light.


Please Note:
There is more than one page for this Article.
You are currently on page 2 Contact Denise Teo