'I started shooting with digital cameras in 2003 and I haven't used a roll of film since. I think that film still has its place in a romantic kind of way'

Imagemaker: Tell us a little about your background and how you got started as a pro

I worked on cruise ships for six years and it proved better training than my three years at university. They gave me a Nikon FM2, 20 rolls of film and said 'start photographing people'. I was about two weeks out of university, wet behind the ears and £10,000 in debt. It was a fantastic grounding; I had to get the picture no matter what and had to make people like me very quickly.

Back in the UK, my partner Kristie and I opened a small studio above a bridal shop. I knew I was a half decent photographer, but I didn't know how to make a business work. We started doing weddings for £150. Now we charge a lot more, but cap it at 15 weddings a year. Weddings are the foundation of the business: our training courses, feature writing, commercial, fashion and lifestyle shoots are the other arms.

My first camera was a Praktica MTL5, which I left on the bus when I was 15!

I remember my photography teacher at college saying that I didn't have the eye for it and that I should consider something else. I was out to prove him wrong.

Film or digital? Is there still a place for silver halide?

I started shooting with digital cameras in 2003 and I haven't used a roll of film since. I think that film still has its place in a romantic kind of way, but will probably not use it myself.

Bit of detail about your own set-up?

We have a 2000 sq ft space split into two main rooms, with offices and a small shooting studio.

The problem with professional photographers today is...

What is the worst commercial error you have made to date?

I once shot the entire restaurant on a cruise ship - over 800 people - without any film in my camera. We used to load our own film so it wasn't unusual to get 60 shots on a roll. I had to go back and do it all again.

Are you excited by the evolution of imaging?

It is exciting that the medium is so open to everyone, but people have to be realistic about making a business from photography.

Is it getting harder or easier to make a decent living?

We have worked very hard to be where we are today with our photography, business and client base. But the middle ground of the photography market is overrun.

How do you stay ahead of the game?

Customer service. We do our own thing and take influences from other places.

Why is The Convention such a big deal for photographers?

It's a good chance to talk to people who are at the forefront of the industry.

Your own mentors (living or dead)

If you could pick just FIVE seminars (other than your own of course!) to attend at the SWPP Convention: whose workshops would you attend. Why?
Gary Fong - very inspirational
Lorenzo Gasperini - great products
Adam Alex - knows his stuff
Anyone who is mixing media - the future.

What do you think will be the next big thing in the industry?

Video already is the next big thing.

Your plans for the next five years?

Refining my own work, products and more location-driven lit portraiture. 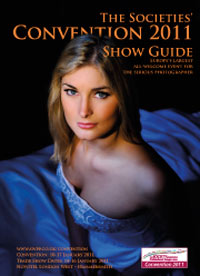