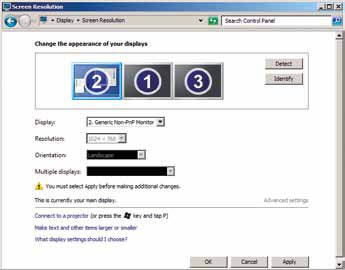 ABOVE: The Windows 7 inerfaces for colour management (or lack of it!). At no stage of the process were we truly sure which monitor or projector was being controlled or profiled, sometimes we had a choice of six and a mouse dangling in virtual space somewhere in the room!

The thing that started this piece was a discussion with Art on the merits of Epson and Canon projectors. We have spoken on the matter before and attempted to shine some light into what is quite a dark corner! There are three types of projector technology, DLP, 3 LCD and a hybrid of the two (called LCoS - Liquid Crystal on Silicon) used in the Canon Expedia series. DLP is a waste of space for photography as it can hardly reproduce a decent red or skin tone to save its life, along with a tendency to annoy some viewers with its flickering migraine-inducing projection (I once ended up vomiting!).

Both 3 LCD and Expedia systems have a good reputation. The 3 LCD technology is owned by Epson and is used on many better projectors including some made by Canon. 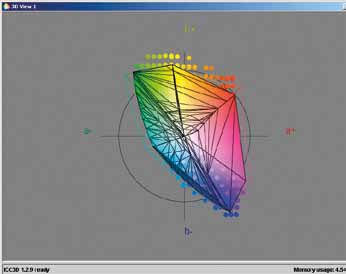 The QA function of i1 Display, in theory, allows the user to put a metric on the colour performance. We say in theory because we could not rid ourselves of the optics too high/low error during the time we had a Canon on test. Then when we had the Epson on test we could not make a profile either! Despite these significant irritations here is what we found.

Before we upset things by resetting the projector we managed to get an audit for the Epson 1810. This was extremely interesting and so we will dwell on the data. The accuracy was quite remarkable, indeed it was a whole order of magnitude better than we had anticipated! The average error across the Macbeth swatch set was just 2 ?E00, up with the best printed page performance we achieve. Looking at the spread of the errors in the Lab plot, the three high errors are the cyan and the two skin tones. The important skin tones are rendered too red and slightly high on saturation. Splitting the hue and chroma errors and plotting those separately provides further evidence; here the two skin tones, the cyan and the purple-blue are outliers in the hue error plot (further from the centre axis is a larger error). In the chroma error plot, the saturation of the cyan stands out as being the main contributor to the error.


Please Note:
There is more than one page for this Article.
You are currently on page 7 Contact Art Suwansang