"Knowledge of the means of extending, restricting or just achieving adequate depth of field is a primary craft skill."

Depth of field is the zone, either side of the plane of focus that is acceptably sharp. Thus if you focus on a group of people and those on the front row are sharp but the second and third rows are blurred then you have insufficient depth of field. If you stop your lens down, you increase your depth of field and eventually you should make the entire group sharp. Knowledge of the means of extending, restricting or just achieving adequate depth of field is a primary craft skill.

How is depth of field calculated?

The basis for calculating depth of field starts with the human eye. This can resolve about 5 lines per mm at a standard distance of 250mm. This fact may be used to calculate the size of the blur circle whose value is expressed as an angle and it is in reality a cone shape. Typically the size of the angle of blur is around 1 minute, ie a sixtieth of a degree. To explain this further, imagine that you are looking at a pair of footballs, held so that they are touching each other. Across a room you can easily see that there are two footballs and so you are said to be able to resolve them. Now imagine that the footballs are moved away from you until, at a distance of a few hundred yards, you cannot tell if there are two of them anymore. Now suppose you have them moved back towards you, until you can just tell that there are two - the limiting distance to resolve them. Now imagine a pair of strings are held either side of the two footballs and brought back together at your eye. The angle that the two stings make is the blur angle for the limit of resolution; a circle around both footballs is the circle of confusion.

If the two footballs were replaced by tennis balls they would have to be brought closer to you to be able to resolve them, but the angle between the strings would remain the same. The same holds true for two grains of sand resting on a print or perhaps the tiny images of the two footballs in the actual print. 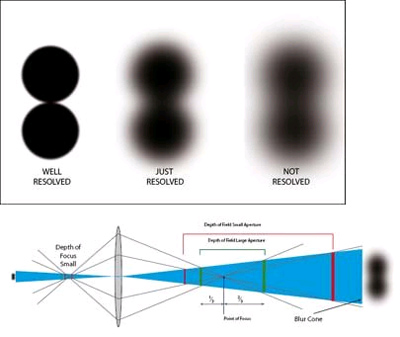 This blur angle may be used throughout all calculations and assessments of depth of field. The only additional complication which arises is that the circle of confusion was determined for photographic emulsions of the middle of the last century, a much poorer standard than the emulsions and digital detectors of today. Thus most contemporary calculations of depth of field still over-estimate the value. The perception of sharpness is also influenced by the visual performance of the observer's eyes, people with 20/20 vision are a lot more critical than most ordinary mortals. A number of long-held views about measuring depth of field have thus been abandoned and even if you are an old hand you may have to revise your views today.

Once you have a measure for the blur angle, calculating depth of field is a matter of simple geometry, because light travels in straight lines. We can track the blur cone through an entire optical chain from eye to print, to enlarger, to negative, to taking lens and out into the real world of the landscape. It is also possible to use ray diagrams to illustrate some of the features of depth of field effects. The diagram shown illustrates a couple of features, namely the effect of aperture and the distribution of depth of field either side of the focus plane.