Browsing a large circulation provincial wedding magazine, with a view to buying an advertisement, I was amazed at the variety and style of the displays by dozens of Chicago area wedding photographers. Many were so poorly conceived it would surprise me if they got any calls at all from them. Others were so well produced they looked like professional ad agencies had put them together.

Taking the weakest of them into account, I wonder just what the photographers were attempting to achieve. Surely the purpose of an advertisement is to communicate something about the studio, the photography and the people involve in creativity. Either the latter group are so new to the industry that this simply was the best they could concoct, or they just hadn't a clue what the consumers are looking for.

One would think that most people would find the most appealing photograph they had ever taken to use in such a large and prestigious journal. But I wouldn't give tuppence for some of the images displayed in this book. It isn't necessary to use the best pictorial image, after all we are not trying to appeal to other photographers. Its not like a qualifications panel.

It prompted me sit down and try and analyze the reasons for designing advertisements, and what one should aim for in the conception and layout of the copy. I also went back and looked over some of the advertising pieces I had used over the past few years to see which was or wasn't successful for me.

Three salient issues came to mind, first; one would expect most photographers to use the very best picture they could produce to advertise their studios. Alternately there may be a few expert communicators who would opt for something, perhaps bold and outrageous, to grab the readers attention and proclaim HEY! look at me! Then there are those who would want to showcase everything they could do on one sheet of paper.

Over the years I have tried all three approaches, with varying degrees of success. One evening while walking past a cinema and noticing the long queue waiting for the doors to open, I thought to myself, if I could only solicit that kind of response to a wedding ad. Then I noticed the movie poster with its superimposed images of the star and co-star..... I thought.... well if it works for Hollywood why shouldn't it work for me.

Back at the studio I pulled three negs. from a wedding that was going through the works, I then made a digital composite, similar to the movie theatre poster, I added some simple wording around it and sent it to a large circulation magazine. Well we didn't book any more weddings than usual that year but it certainly brought a lot of comments from all who saw it. 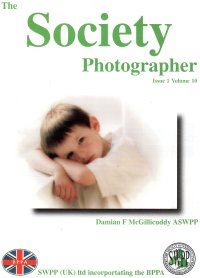