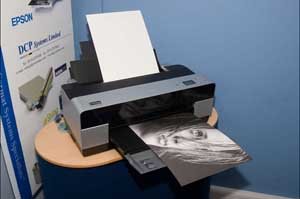 Having had a tantalisingly brief encounter with the new Epson 3800 before the last issue, it was with great excitement that we unpacked one for a more exstensive testing sequence. Things got away to a spectacular start with tremendous out-of-the-box performance, better than we obtained from the pre-production model and we remain convinced that this printer is going to sell in vast numbers, satisfying as it does the requirements of many professionals and enthusiasts alike.

The size of this printer is far less daunting than its wide-format cousins, indeed we have already persuaded quite a number of colleagues and readers to lay out their pennies, purely on the grounds of practicality, ie it fits into their office, whereas the 4800 was too big. This printer could be handled by a single person with ease and so unpacking was less problematic, a 4800 or 7800 is a two-person lift. There is a lot of blue tape holding things in place though and you are advised to unpack carefully and methodically so as not to leave any behind to gum up the works. Beyond that the system is a dream to install, open the door to the cartridge compartment (it's electronic by the way), give each cartridge two shakes and push it in place. There are nine of them as you now get both Matte Black and Photo Black options again (yippee!!!). The system automatically primes itself and once the drivers were installed we got a perfect nozzle test first time of asking. Note that you should install the separate modules for help files/ manuals, profiles and the LFP facility individually - they did not auto-install. 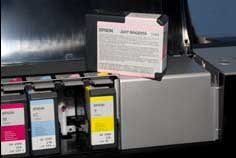 The printer measures 27" x 15" deep by 19" high when closed up. You will need 18" to 29" clearance in front of the printer when making A2-size prints and up to 18" space behind the printer if you wish to print through the front paper feeder (eg for board). The total weight is just 43.2lb, almost exactly half the weight of the 4800.