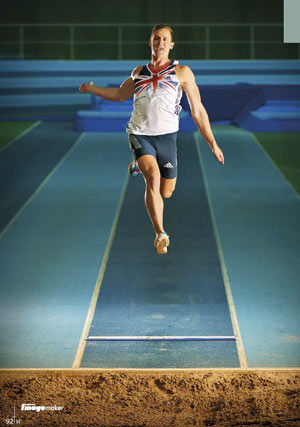 There is nothing like flash for freezing action. So when I wascommissioned by Sunday Express Magazine to travel to theEnglish Institute Of Sport in Sheffield to shoot one of ouryoung hopefuls for the forthcoming Rio Olympics, decathlonstar John Lane, it was an obvious choice to pack my versatileElinchrom Rangers.

It was arranged for me to have some time with John after his morningtraining session and we would get access to the indoor track wherewe could shoot him against athletic impedimenta for the perfectbackground. While I was, as usual, going in blind and without the benefitof a reconnoitre at the location, I wanted to try and get somethingspectacular, considering that I would be shooting one of our world-classathletes. After shooting a couple of 'safe' pictures, I asked John what hewould be prepared to do and how could we get something eye catching.

We decided to try and stop him dead in mid air while he was performinghis long jump. So to provide a slightly different approach to the pictureand spotting the running track banking high behind us, I decided toshoot slightly down on John by standing on the running track at itshighest point, rather than the obvious low angle looking up. Not onlythat, ceilings not adorned by Italian masters are rarely very pleasingon the eye and I would be able to use the running lanes and

the otherathletic equipment to add to the overall feel of the image.I set my camera to the fastest flash sync shutter speed of 1/250th of asecond and as John was jumping towards me, was pretty confident Iwould be able to freeze him. I then selected an aperture of f5.6 and ISOof 1600 so that I could still include some ambient light behind John,which would be now rendered around a stop and a half under myaperture at 1/250th. I then placed my first Ranger with a metre squaresoft box, to the side and front right of the frame as my main light andthe other Ranger with a broad spill honeycomb grid, was placed to therear and left of the area that I knew John would be leaping into. Themain light was then adjusted to match my selected aperture, while therear flash, which would act as a clip light and separate John from theslightly darker background, was adjusted to provide around a couple ofstops above that. 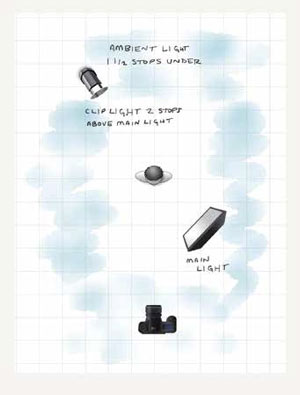 Both Elinchrom Rangers were taken as high a their stands allowed,as I did not want the light to appear to be from an unnatural upwardangle, and great attention was given so that neither light would cause ahotspot on the floor, as these are never attractive and being very bright,always attract the eye away from the main subject. This was achieved byslightly 'feathering' the light and angling them up and away from thefloor.
John was instructed to look at the lens in mid flight and if possible,look happy, as the storyline was very positive about him successfullybeing treated for skin cancer at a very early age and the camera wasprefocused on the sand as John made his run up.

As this was very strenuous for him and we did not want to risk injuryfor the sakes of a photograph, we limited his jumps to around half adozen only, with myself giving directions to improve the picture as weprogressed.

The final image of John perfectly sharp and frozen mid lane, eyes tocamera AND even a slight smile on his face, was actually the fifth picturetaken.

If you would like to see more of my work, learn a few of the manytechniques that I have acquired over the years of shooting editorial,TV and corporate at the highest level, then I would love to see you atone of my classes at the forthcoming Convention. This year, I have aMasterclass, a Superclass and a location day too!

Hope to see you there!
Stuart