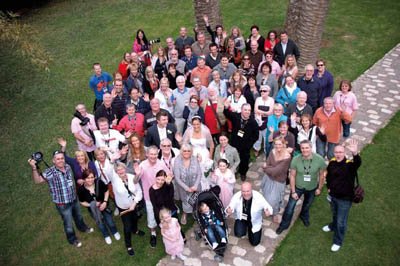 Photo Training Overseas returned to the country and the same hotel where it all started 25 years ago to celebrate this incredible milestone. In January 1988 FujiFilm launched their Fuji School of Professional Photography the brain child of the legendary Graham Rutherford, in collaboration with George and Glenys Dawber, who at the time were actively involved as marketing consultants to Fuji Film UK in the wedding and portrait sectors. The idea of formal training by other successful photographers was outlined and demonstrated to the UK press who were in Tunisia in force as guests of Fuji Film. Four social photography specialists acted as tutors - George Dawber, Lawrence Sands; Ian Coates and Paul Yaffe, they presented practical demonstrations during the day and in addition conducted evening seminars on their marketing and promotional ideas to a group of around 80 enthusiastic attendees.

Since that early period Fuji began to dominate the film market, taking on their great rivals Kodak and the Fuji School became a annual feature both in the UK. The first major, economic recession came about in 1993 - oh yes we have been there before - and Fuji decided to withdraw from the overseas activity as sole sponsors and concentrate on the UK version. George and Glenys Dawber re-named the enterprise Photo Training Overseas and re-launched the following year with a few interested photographic companies joining Fuji as joint sponsors. Fuji has remained to this day as a sponsor such is their belief in what PTO achieve for the photographic industry.

Now some 25 years on this annual event has changed the lives of many aspiring and indeed established photographers. It certainly came of age with an inspirational line-up of talented photographers in Tunisia; which of course was the first of the Arab countries to stand up and protest for democracy, with street riots which eventually deposed their dictator president in a comparatively bloodless coup. They are now desperately trying to return to normality. However, it was evident that with a massive downturn in tourism many of the countries tourist areas were seriously under occupied as indeed where their beautiful hotels. Only time will tell if they ever fully recover.

However, the delegates on this PTO trip had more than enough to keep them fully occupied as they scurried from one tutor to another in an action-packed week of intensive training. 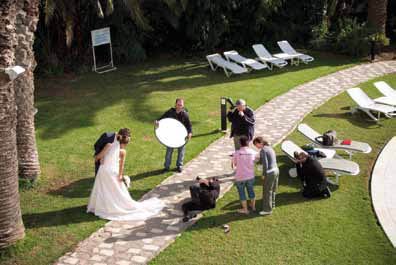 Delegates are divided into four, fairly equal colour coded groups and after a series of introductions they were treated to some of the most outstanding tuition available anywhere today!

Ziba Salehi a young talented wedding and portrait photographer from Iran; after a nervous first session blossomed and enthused her groups with her spirited demos, enlightening all present on how to use the most difficult and mundane situations to create emotional and meaningful wedding images in indoor or outdoor situations. Then they had Keith Trainor a laid back individual who operates a highly successful corporate and events photography business; Keith travels around the UK setting up his portable studio and creating the most inspiring and unusual saleable pictures of people at major events. Meanwhile the informative and creative Photoshop Guru that is Dave Wall was working away in his little area, making all aspects of Photoshop and Lightroom look remarkably easy. Delegates warmed to Dave with his ability to communicate in a manner that was easy to understand. Last of the presenters for early part of the week was the articulate Sean Conboy; now this guy is some talent, he had delegates and many of the other tutors sitting in on his demos in awe at his great attention to detail and exceptional lighting skills when photographing architectural interiors to an supremely high standard. The first evening seminar was the photo competition critique involving a number of the tutors making comments on all the digital images submitted for the competition. Four of the tutors had pre-judged the 30 finalists and sponsors, One Vision Imaging, had already made some superb prints which were then put on display for all to marvel at. The winners, runners-up and overall winner was selected by the judges and revealed at the end of week awards party, with trophies presented by Phil and Juliet Jones of The Societies who kindly sponsor these mementoes.