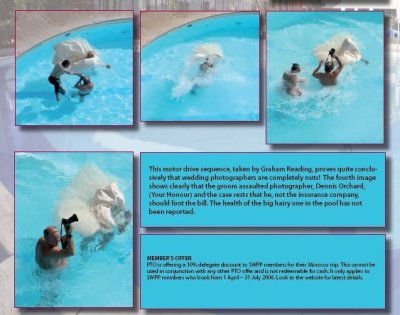 Phil Jones reports on the SWPP continued invasion of the islands of Europe, this time with Photo Training Overseas!

The Pestana Casino Park Hotel, Funchal, Madeira was the venue for this year's one week Photo Training Overseas (PTO) trip. Funchal, the capital of Madeira Island, is on the south coast of the principal island and is the home of the majority of islanders. The beautiful and yet peaceful island is very fertile and covered with plantations of fruit trees, especially bananas.

However, the peace and tranquillity were soon shattered when 100 photographers and sponsors arrived to enjoy a week's training and partying, and boy how photographers know how to party.

PTO, now in its 19th year, is organised by George and Glenys Dawber, who provided an excellent line-up of speakers, all of whom were willing to share their trade secrets and knowledge with 30 attendees. The speakers included: Mark Cleghorn, Mark Nixon, Denis Orchard, Bjorn Thomassen, Laurel Guilfoyle, Hossain Mahdavi, Sue Anderson, Brian Fair, Tracey Mahdav, Glen McDonald and Jim Morland.

The attendees were split into small groups, many of which took advantage of the stunning surroundings and the willing models. On more than one occasion the 'bride' ended up fully clothed in the swimming pool, swiftly followed by half of the delegates.

This exceptional week was not only about education, the Dawber's had also arranged great entertainment. One evening was spent over at the casino with a live dinner show, which in itself was spectacular to say the least. Other entertainment included local music every night either at dinner or in the bar, or even both, making this a memorable experience.

Just about everyone met each day at the central meeting point (the bar), the Madeira wine flowed along with just about every other concoction of drink, everyone seeming to have a great time. Through photographers being what they are, there were numerous impromptu seminars late into the evening on everything from available light to Photoshop!

The week soon flew past and it was off back to the airport and back to reality....