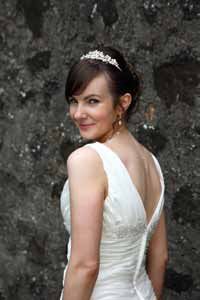 As with most things photographic, within a few months Gary had bought a zoom lens, together with a wider-angle lens in a promotional offer (nothing new in this world) and started to take very nice pictures of their two daughters - always willing subjects for a bag of sweets!

And then it happened, friends just started to notice the lovely pictures around the house and asked if Gary could take some lovely pictures of them and their kids in the same relaxed, fun style. Guess what, their friends saw the results and wanted pictures just like that as well and the business that was never meant to be had accidentally started, alongside a full-time job.

Reflecting on history, Gary would tell you that one of his luckiest breaks came when he was in the local frame/album/ mount suppliers, who noticed that Gary was buying quite a lot of items from him, and gave free advice on costing/ charging. Not knowing any better, and having paid for studio work in the past, Gary just listened and put it into practice and his clients just paid. Gary had found out how to make it pay - not just doing it for a bit of fun, which is just fine for your own family, but completely stupid when you do the same for friends and others. Gary has always found that if you charge enough, people will remember your name, then, when you deliver a product that is simply amazing quality and value, they will pass it on to others!

So it was that from day one, Gary treated the photography as a business, each job had to pay, and pay well and fairly. There is absolutely no sense in being a busy fool, people will not respect you for it.

Then the inevitable happened, someone asked Gary to photograph a wedding, which, with incredible trepidation, a total lack of sleep for three nights before, not even thinking about the three after while the films were in the lab being (express) processed and printed, he did. The couple were absolutely thrilled as were all the family and guests. They were thrilled not only with the images, but also with the fun they had on the day and the way they were treated. Many of them bought even more than was originally ordered. The recommendations started to roll in, Gary Williams Studio was born...

Gary Williams Studio carried on for a few years with Sue playing a supporting role as often as she could (she was running a family, oh and a hairdressing business as well). Sue was Gary's worst critic or was it best critic? (She still is for that matter, but it is always constructive criticism.) She then came along to a few weddings, carrying a camera bag and observing. After a couple of weddings, telling Gary that he missed great pictures, because unlike a woman he couldn't be in two places at once and have eyes in the back of his head (a fun sexist comment only - honest), he bought her a camera and ended up carrying his own bags again!! Gary and Sue Photography was born...