Rolling with the LITTLE Dog, Paws for thought - part 1 of 1 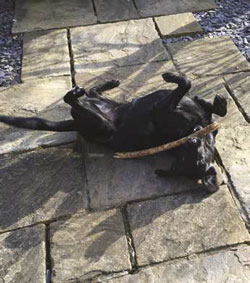 Hello humans, time to bring you up to date on the world of dogs.This month my Humans got very exercised by something calledan eclipse. I played along thinking they meant an eclair, whichTreacle says taste nice and are loaded with chocolate (which weare not allowed) and cream (we sometimes get the pot to lick). AnywaysI was dragged outside into the front garden, with Themselves explainingthat for a dog like me this was a once-in-a-lifetime event that was not tobe missed. Well thank goodness for that because it was all very boring. Iamused myself chewing my stick and whacking it against Himself's tripod,which got him very annoyed, so I settled for rolling about on the path.

It did not seem to go smoothly. Himself had the camera set wrong andthe sun moved out of the frame of his camera, but that was only for theshort time the sun was visible. Eventually it clouded over totally and theyall grumped into the house to watch TV and another bunch of peoplegrumping about the weather while they all watched the pretty girl flyingabove the Faroes bragging about the perfect view that she had. Theyare so enthusiastic these people, if they had tails like us they might wagthemselves into self-destruction.

Anyway, to more pressing matters. The tagalong made an appearancethis week. I went into a panic attack and started hyperventilating but wasassured that the Humans are going to sell it. I hope to get a share of thesale, it is mine after all. When they say 'little used' on ebay they really meanit; it has only be out twice in almost two years. It represents a triumph forprotests the dog world over.