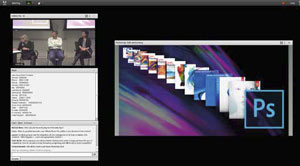 He did not mention it but the development of cheaper, more powerful desktop computers was a key driver to facilitating Photoshop use and also Desk Top Publishing. In the early 90s RAM was eye-wateringly expensive; in one lab we used to visit the RAM was securely contained in its own room, all 64 megabytes of it!

The inventor of Photoshop, Thomas Knoll was present at Adobe HQ for a webinar hosted by Vanessa Rios to celebrate the 25th anniversary of the public launch of Photoshop (it was actually started in 1987, in 1988 Adobe made the decision to license the software, naming it Photoshop). Back in the earlier days it was not even called Photoshop - it started as ImagePro, morphed to PhotoLab, then to PhotoShop (with Display making an appearance somewhere along the line but Knoll did not mention this). Adobe eventually came on board and dropped the capital S to lower case, while retaining what was originally just a code name. Knoll had harboured the view that some clever marketing guru would come up with a new name but that never happened. And so it stayed - Photoshop.

Knoll came over as a modest thoughtful guy, a man who never got around to finishing his PhD because image manipulation took over his life but who, today, is still thrilled to see his baby has become the verb 'to be photoshopped'. Apparently the legal guys don't like this usage but they will never stop it now!

The very first image to be photoshopped was of Knoll's girlfriend (and later his wife).

He was asked about the significant milestones in Photoshop and responded thus:
1. Originally the program was designed for press and graphics use. Images were difficult to get in and out of computers and at the time all you could do was output to four cmyk plates and print on a printing press. In this state the program became the dominant market leader.
2. The most important innovation was the incorporation of layers in version 3 in 1994. This transformed the ability to make composites.
3. He could never have imagined something like 'Content Aware Fill' back in the early days; the computing power was one million times less than that available today and would have been impossible anyway.

Knoll offered the opinion that as Photoshop was already a market leader, it was well placed in 1993 to take advantage of the emergence of the World Wide Web. A case of 'right time, right product' because an application was needed to resize and prepare files for uploading to the web as small JPEG files.

His next milestone was the invention of the inkjet printer. Suddenly the workflow was complete from capture to local, one-off output. Soon after that the arrival of digital cameras for the mass market simply accelerated the growth of the user base (it was scanners before that).

Knoll was asked about the Cloud subscription model recently implemented. Although he initially had concerns, he now favoured the idea because Adobe had dropped the price and because it gave the program engineers a different incentive model. Previously it was vital to develop a flashy quintet (or so) of new features to drive the upgrade sales, whereas now the incremental upgrades allowed more important but less glamorous improvements to be introduced only when they were fully ready to go.

Overall the hour passed very quickly, a bit like the past 25 years really, but it was interesting to see and hear the man who has had such a profound influence over the photography and printing industries - not bad for a failed PhD; somebody offered the view that it was about time the University of Michigan offered him an honorary doctorate!