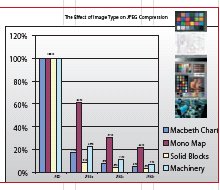 In addition they may also be confronted with the need to mix images from more than one light source onto the same album page (where any discrepancy will be mercilessly revealed!). A compromise here may be to shoot both, either simultaneously or by mixing according to the shot. Either way, strive for perfect exposures every time, it will make you a better photographer. There is an analogy here with the longlost debate about medium format and 35mm. If you remember we used to drag the 'Blad about regardless of physical cost to the body (photographer's, not camera's) just in case that life-changing shot presented itself (it never did!). Also, if you remember, when all you had along was 35mm you wished you had packed the 6x6, and when you had the 6x6 you wished you had put the 5x4 in the boot. Little changes, except that with the file format debate you actually have a choice and the only penalty is an extra Compact Flash card or two. On the down side there is another analogy in the situation. You could always find a place to project a 35mm slide but the options for 6x6cm slides (or even larger) were severely restricted - in this instance the big slide is a RAW equivalent - better quality, but less versatile. 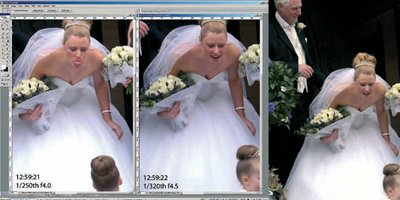 This shot crystallises some of the problems of shooting weddings. The shot on the left caught the moment but at the wrong exposure. The shot on the right, taken exactly 1 second later, misses the moment, but has reduced the exposure by of a stop, getting the exposure closer to the correct value. The camera was being trialled in Program Mode - it was not a success and is a perfect illustration of the dangers of over exposing digital and the use of Program Mode - an incident light reading would have been unaffected by the subject. However, the bride's dress is blown out in the blue channel (leaving a yellow "stain") while the father in the background is down to between 16 and 20 RGB points on his suit. It needed just of a stop less again (or a splash of fill). Program Mode did not have a clue what to do! Additionally, Auto White Balance put the dress too blue by about 20 RGB points. Bringing the green and red channels up to the blue value (of 255) neutralised the image; it did not however bring back any of the lost detail. The colour corrected JPEG file is shown on the right of the screen grabs. For the record it was a heavily overcast day - hardly challenging conditions for photography! Many would argue that a better rescue would have been possible with a RAW file, others would (rightly) say that taking an incident reading and perhaps waiting for the RAW buffer to come free would have lost the moment - take your pick!

Keep or Trash? When you used to get the trannies back from a shoot you used to put them all out on the light box and either fling duffers in the bin or leave gooduns on the light box. Anything with shut eyes or the wrong end of the bracketing scale was filed in the little round thing and it was (with some at least) a badge of honour that there were less up top than down below. The problem today is that the blinkers can now be rescued in Photoshop and you can very quickly convince yourself that the one with the bride's eyes shut is the best one of everybody else, etc. Effectively, more is now getting left on the light box and the worst manifestation of the problem is a sloppy attitude engendered by the "fix it in Photoshop" mentality - very dangerous territory indeed this!

Storage Issues Some pundits hold that you should shoot JPEG because it takes up less space in computer storage. With a hard drive of 300GB capacity costing £80 this is a dubious argument. Storage today is cheap as chips! What is true is that if you shoot more images with less care, you have more to process, more to store, and more to look through when you are choosing. All these issues are reduced if you take more care at the shooting stage. An A4 at 200ppi is an 11MB file and always was. That is unlikely to change. In place of the 1GB drives we had at the start of digital, we have 300GB at a fraction of the cost, instead of 600MB CDs we have 4.5GB DVDs - and an A4 at 200ppi remains 11MB - are you getting the message?

Myth Killer Proponents of the "shoot JPEG and get it right in the camera" persuasion miss a vital point - you may not be able to! Suppose you wish to increase the saturation in an image. You can process a RAW image and effect this change, you can process it twice at different saturations and blend the two together for the best of both developments. This is the equivalent of hand processing a print and using darkroom techniques to create changes (never a quick process or cheap for that matter). If you wish to increase the saturation on a bunch of JPEG files you have to create an action and batch it - possible, but not as neat as the RAW method.

Have you thought about becoming a better photographer?

"Phix it in Fotoshop" has become the last retreat of the visually incontinent. Some people out there think that reportage wedding photography is about firing the camera from the hip and motor-driving anything that moves - nothing could be more wrong - there is a difference between catching the moment and catching five moments either side of the moment. In any case, the fire extinguisher you failed to spot now appears on 10 shots instead of none - use your head, use your feet, stare into your view finder until it hurts!