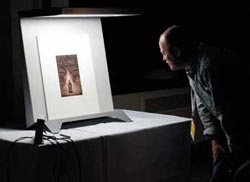 Every print is examined closely even during the preliminary rounds.

The viewing stands provide lighting to ISO 3664 standard and a number of prints were caught out under the 2,000 lux of colour corrected light! Many of the errors such as banding through over use of effects filters, lack of shadow detail, un-cloned eye-catching distractions, excessive noise and poor masking work are correctable only if the print is examined critically before submission. Presentation is also important.

At the winning end of the scale it is often the tiny, unattended details which separate two otherwise exceptional prints. With the large cohort of judges (strengthened for the finals when everybody was released from Qualifications duties) split decisions are almost inevitable. 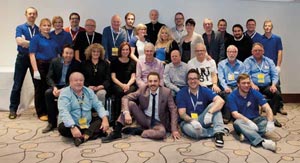 Dave Silvester did well to catch the unruly mob of judges and print handlers!

The overall winner had the distinction of being the only one to receive a unanimous vote, the other winners and minor placing were the result of much debate, indeed the camera metadata shows us starting at 2pm and finishing at two minutes past 7pm! For our finals each category of prints are set out for the judges to examine (in silence) and this is followed by removal of those prints with less support, in an ever-increasing spiral of tougher rounds until about five prints remain. These prints are then returned to the viewing booths alongside each other. If an exploratory count suggests a split vote then a number of judges are invited to plead the case for the print that they prefer with the general proviso that they are not allowed negative comments about the other, competing prints. This is where the process can become impassioned as judges try to bring the undecided over to their way of thinking and in some cases persuade people to change allegiance. Eventually after several more elimination rounds the winner is decided by majority vote. The process is educational, absorbing and, in the main, conducted with professional good humour, you sometimes have to take defeat gracefully if you have failed in your lobbying! This, though, is the point at which minor flaws become critical; when two prints, adjudged of equal artistic merit and impact are left in the viewing booth it is impossible to defend any technical flaws which should rightly have been removed or cloned.

Congratulations to all our winners and also to those who failed to make the selection but nevertheless gave the judges plenty to think about! Finally the Societies' thanks are extended to the chairpersons, judging team and the hard-working print handlers.