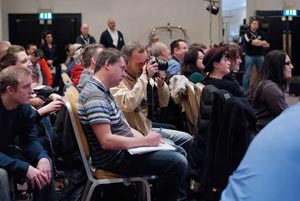 The Convention is a significant part of the Societies operation and a significant outlay for those attending, carrying, as it does, a need for accommodation, food, travel and beer money! By default then, some people miss out without really knowing what goes on. Those in the know tend to regard the outlay as money well spent and simply enjoy the experience time after time.

So here is a brief, insider view of what goes on. The first thing to say is that it is big, as conventions go, one of the largest around, which is why so few hotels in London and none outside the capital can provide sufficient facilities. The first-timer is confronted with a massive amount of hustle and bustle about the place: people greeting old friends, people rushing to seminars in rooms they cannot find, Societies staff shouting into radios for back-up and lighting gear, models in fantastical outfits, wedding gowns or practically nothing at all, moving to between gigs; and smeared over all that, people who are just plain lost. Despite strenuous efforts to beef up the signage, finding your way around can be difficult. The seminar rooms are spread between the East wing complex (over four floors), the maze that is the Business Centre, along with hired rooms for more intimate boudoir work, out-and-about seminars which can be both on-site and off-site. Four rooms are taken over by the judging and qualifications operations with judges being detailed to different rooms to provide their specialist expertise and the print handling teams moving about with armfuls of prints. The common links and focal points for meeting are the various bars and restaurants. Here is where the networking and getting to know new friends takes place - making new friendships is one of the key activities of the Convention. 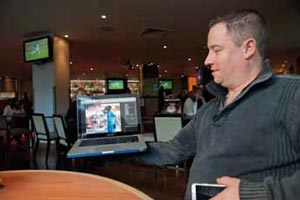 We're in the bar but we are working Boss! Premier Division photographer, Ian Cook, is downstreaming still images taken by his CameraSport colleague at the Swansea-Tottenham Hotspur game, while sampling champagne-priced beer. The same match is showing on Sky in the bar area behind.

Overlaid on all of this activity are the several floors of trade stands and this area can become very congested. If you secure a particularly attractive deal there is even a DHL service in reception where you can have your new goods shipped directly to your home (you cannot take an A2 printer as carry-on luggage no matter which airline you are flying with!)

Connecting these spaces together are the link corridors where this year the massive 16x20 competition was hosted. There are plenty of prints to chew on and security staff reported people walking the aisles of images as late (early?) as 4am. Even the aircrews we share the hotel with were stopping to look at the pictures.

Of all these which is the most important? Probably the socialising; photography can be a lonely, solitary profession in which you may be regularly meeting with clients but rarely chewing the fat with fellow sufferers. That is why the beers and coffee sessions are so important, you might meet somebody in a seminar coffee break, continue the conversation over a glass later and bingo a friendship for life has developed. If you bring a problem to the Convention it is rare that you leave without a clear solution in your head (although clear heads are not always the order of the day at breakfast). It is also why staying within the hotel is vital, a lot of the good stuff gets done in the wee small hours!