"Phil, it's almost midnight and we have to get the van packed to leave for Coventry. You can keep picking up Convention bookings when we get there!"

Pre-registrations had gone nothing short of wild this year. At best estimate we were expecting a top end of 3,000 attendees, but never in our wildest dreams could we have anticipated the astronomical sum of 3,416! By 1pm on Saturday 14 January, the girls on reception had run out of 'Trade Only' red badges and were getting busy with felt tip pens amending the other colours we had in reserve.

Juliet was heard to say, " I had two and a half thousand red badges, are you sure they're all gone?" An air of disbelief spread throughout the Convention team as the event had evolved into a truly international affair with attendees from 21 countries converging on Coventry for what has undoubtedly become the best Convention outside the Continental United States. As for Phil, in his usual laid-back manner..."I think it's going OK, don't you?" - as ever a modest master of the art of understatement.

With the event utilising over 1,000 bedrooms in the Coventry area, I really felt sorry for anyone wishing to visit that fair city on the off-chance that weekend. Certainly a case of 'No room at the inn'.

The event kicked off on, of all days, Friday the thirteenth! Certainly not unlucky for the SWPP & BPPA as a lively audience packed the marquee to listen to Australian guru, David Anthony Williams. Attendees were piling into the Royal Court Hotel as the trade delegations desperately fought to set up their stands while being bombarded with questions from information-hungry delegates. So much for the Trade Show opening at 4pm! 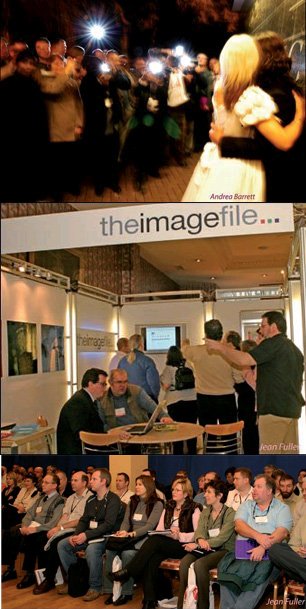 Luckily there were few last minute changes to the programme. American marketing dynamo and lord of the 'Big Whopper' (you had to be there folks!), Mitche Graf, was unavoidably delayed due to the fact that a French air-traffic controller had mistaken a sliver of cheese and a caper for an outgoing 737 bound for Birmingham and immediately ate the evidence! The larger-than-life, Malcolm Mathieson not only stepped into the breach to fill the gap, but also agreed to repeat his programme the following day to put us back on schedule.

In fact all the speakers acted as though we were one big family, offering to help wherever and whenever they could to ensure not only the success of the event but the enviable camaraderie that is fast becoming the hallmark of the Organisation and Convention. Walt Malone from Canada even stood at arrivals at Birmingham airport welcoming the incoming international delegates who were being shuttled to their respective hotels. Thanks Walt!

And so the die was cast. Seminars bursting at the seams with delegates anxious to take in as much as they could over the next couple of days. Morning, noon and night there was no shortage of choice on that front. Marketing and presentation, weddings, portraits and other specialist disciplines made up the menu for this feast of training.

It would take pages just to list our distinguished speakers and their achievements so I will content myself with plagiarising the well-known words of our greatest statesman... 'Never has so much been done for so many, by so few.' Thank you to each and every one, from all of us.