The time-based fall off in performance of Windowssystems is an insidious flaw. As time passes, the boot timeextends and , in the worst case, the machine slows to theextent that it rests between frustrating and unusableas an office device. A drastic solution is to reformatthe operating system drive and re-install the entiremachine's software. On systems such as those used hereat Professional Imagemaker this is a huge undertakingwhich can involve about three weeks of pain as thingsare brought back to full working order (and that is withlong check lists so we don't forget too much!). 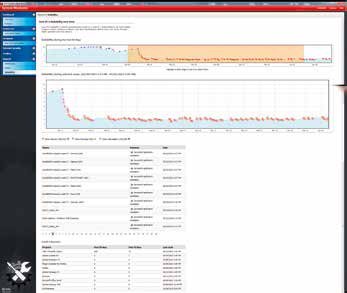 Iolo System mechanic is one of several software solutions on the market which is intended to reduce the pain of the process and rid a machine of unwanted clutter. It does this by checking and, if necessary, repairing, hard drive errors, emptying temp files and recycle bins, dealing with cookies as well as checking the health of both RAM and system drives.

When 'Analyse' is run, the system is interrogated (takes about six minutes) and then you are offered choices of actions for any offending items.

These might be duplicate applications, dubious executable files, etc, but might also include stuff you actually need to start-up such as your screen calibrators.

The system is watched on an ongoing basis and all error events are logged.

These may be reviewed and our system suffered a spate of crashes which appeared to start on 11 February 2014, as indicated by the dramatic fall in the reliability parameter. Drilling down into the menus shows that a series of Windows security updates were loaded at that time but nothing else of note. This suggests that one of the updates is the bad actor in the set-up. The Crash Odometer indicates that 205 crashes were due to the 'Task Scheduler Engine' along with a few solitary failures of various software applications.

The History also provides a listing of software installations and the dates that these were made (in the example shown, you can see CorelDRAW being installed for the review in this issue of Imagemaker).