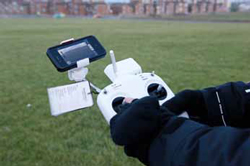 Although Christmas has come and gone you could start saving for next year. How about the ultimate boy's toy, an unmanned drone carrying a small camera. These are becoming more popular by the minute and the potential for using them commercially is currently only limited by CAA regulations. Most recent announcements suggest some changes to the legislation by 2015 (at the earliest). This might release some of the current constraints which require the commercial user to have a CAA pilot's license. The topic even has its own website these days: www. droneJournalism.org and the site operator, The Professional Society of Drone Journalists (PSDJ) now boasts a worldwide membership of more than 100 professional operators. The UAVs (they don't like the connotations of the term 'drone') are popping up everywhere from China (where four people were arrested recently, accused of endangering aircraft in the vicinity of an airport) to riots in the Middle East (where an obliging policeman drew his weapon and shot the drone out of the sky!). Other Youtube-published disasters include clattering into an embracing couple at a wedding and dive bombing various public events. 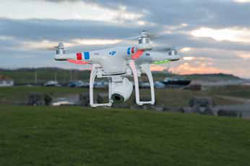 For our part, our ambitions are more modest we took one down to the seashore and flew it about for a while. The DJI we operated was fantastically simple to fly, very stable and easy to manage. The operator control console has a clip so you can plug in your iPhone for 'first person viewing' - it shows what the camera is seeing. Quality is currently a bit poor and a more refined version is due for launch soon which will haul better cameras into the air. Very much a 'watch this space' this one, carefully flown they are likely to have many uses and opportunities. The DJI is presently priced around 850 (boy's toy territory!)