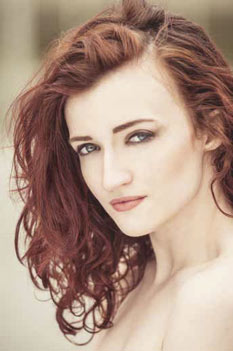 In November of last year, in a slow-burning slump of post-graduate disillusionment, I was tipsily preening and prepping for a nostalgic catchup with increasingly distant university friends when I received a message out of the blue from a total stranger posing one question to me: "how would you like to be a model?" Too busy for strangers on the Internet and my head filled with recruitment agencies and temping jobs, I ignored the message and got on with my night. But as the hours passed by and the silliness turned to the inevitable questions: "what have you been up to, what are your plans, what are you going to do with your life?" that odd little message lingered in the back of my mind.

Cut to two months later, and I'm standing on the top of an old lightship on the partially frozen solid surface of the Thames in an enormous wedding dress. Two days after that, I'm surrounded by hundreds of photographers sipping wine at the awards ceremony of Europe's largest annual photography convention. It's a whirlpool of talent and creativity, of larger-than-life characters bonded together by a shared passion and a shared love of fun, of loving what you do and every individual second of doing it. And I'm sharing it all with that stranger, who's no longer a stranger but a fast and inequitable friend, maestro of light, beauty and generally brilliant photographer and trainer, John Denton.

John works on an ethos of taking on untrained models who have, perhaps, never even thought about posing for a living and unlocking, nourishing and ultimately unleashing their potential, generally by throwing them head first into the deepest part of the deep-end. Or, at least, you have to think in that moment, that's what he's done for me.

The initial plan was to bring me up to the studio in Yorkshire for a testshoot once the Convention and its fever had been left in the dust, butwhen unforeseen circumstances left him without a model only a fewweeks before the big day; John was forced to put his faith in me. A day atJohn Whitmore's Studio with him, Clive Hall and Clare Woolford was myonly experience before travelling north to shoot with John. Sometimesyou know from the get-go that a partnership is going to create somethingmagical, and, fortunately, such was the case here.

To someone who has never seen more than three photographers in thesame room at one time (more than enough!), the Convention is madness.For those who haven't been, it's five meticulously planned days of classes,judging, location shoots and socialising. For the photographers it's achance to share tips with peers, look for new ideas, tech and sponsors,and perhaps partake in a touch of schmoozing on the sly. But for me it wasnon-stop: booked solid, flitting from one photographer to another witha hair's breadth of preparation time, to assist with whatever they have instore. I shot everything from bridal to boudoir, and who knows what else.I'd spoken to each of them by email beforehand, of course, but still there'sa certain nervousness that comes with working in this way. What will theybe like, will they take themselves too seriously, will they be expectingsomeone more experienced than me?

I worked with four different photographers aside from John during mytime at the Convention: portrait photographers Christina Lauder andPanikos Hajistilly, wedding whiz Scott Johnson and TV mag-frontingStuart Wood. All totally different people with totally different styles andapproaches to their classes, but all similar in one respect - they wererelaxed, friendly, and effortless to work with. I learned so much fromeach of them. The atmosphere was infectiously easy; who couldn't have agiggle when as well as the speakers, the person staring up at me from theaudience is the person I had a drink with in the bar last night (and there'sonly so seriously you can take a girl after seeing her dribble her drink ontoher top for the fifth time). It's a big kiddy pool, everyone knows each otherand is looking to have a laugh, put on a few pounds and maybe get a fewgood shots while they're at it. Each day after I'd finished up my classes, I'ddash to my room for a quick change and then it would be out for dinnerand drinks with people I'd only just been introduced to but who greetedme with a big bear hug as though we'd known each other for years, andoverwhelmed me with the feeling that we probably would!

Besides all that mushiness we even managed to slip in a bit ofphotography. John and I had been planning our sold-out location shootfor weeks by this point, knowing we would be going to a fantastic, scarletredlightship tracked down by the frankly genius Terrie Jones. Like giddyschool children we had come up with seven totally different looks, six ofwhich we managed to cram into the allotted time on site with the fifteenphotographers we brought in tow.