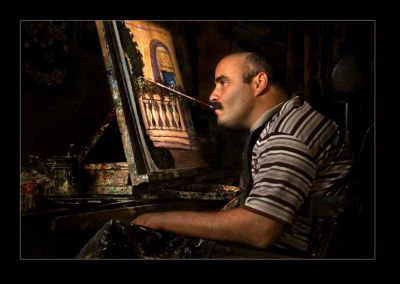 "...because I believe that an artist will never stop learning."

Every now and again during the judging of mainstream competitions an image is set before the panel which causes a distinct stir in the room. Comments before the judges have scored are unwelcome in the judging room, but when something really outstanding pops up there is a change in the ambience of the room - you can almost hear the judges agonising over whether to start their scores with an 8 or a 9; the judges are suddenly aware that there are others in the room as the onlookers crane forward for a better look. When we score high marks there is often a ripple of approving applause - and then you know, as a judge, that you have hit the spot! Just such a moment occurred last year when Chris Azzopardi's image of a mouth-painting artist came on screen. It went on to win Environmental Portrait of the Year. It was a combination of the environment, paint scraps on every surface in view and the intense concentration of the painter that caught the eye.

Chris has won a great many awards in the past six years including Malta Photographic Societies' Photographer of the Year on four occasions. He has also won a number of awards in the Societies' competitions, perhaps the most notable being his 67 Gold awards in the monthly competitions - such repeated and consistent successes point to an exceptional talent. He is booked to speak at the Convention in 2011 and it looks like one you should not miss! 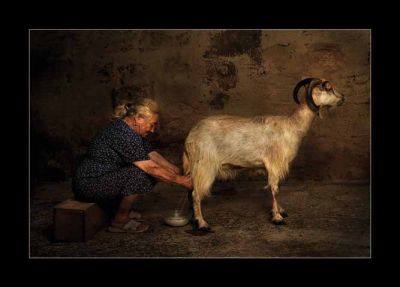 Art plays an important role in my life, in fact by profession I am a teacher of art at one of the leading colleges in Malta and a visiting lecturer at the University of Malta where I teach computer graphics. I studied art at the State School of Art in Malta, University of Malta and Accademia di Belle Arte in Perugia, Italy. It was just six years ago that I began taking photographs. I first began to take record shots of my daughter who at that time was still a baby but I immediately got hooked to photography and soon after I joined the Malta Photographic Society to learn more about this form of art.Since childhood I was interested in capturing the human form on paper and canvas, and so in photography it was an obvious choice to specialise in portraiture. Most of my photos are not commercial; I do them for passion, even commissioned work. Although I try not to be commercial in my work, more and more people are hiring me to take their portraits.