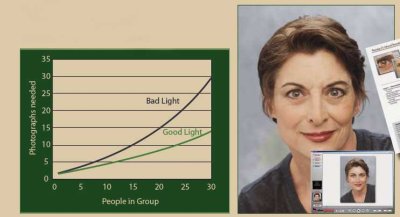 It's not all about opening eyes. In Jane Conner-Ziser's tutorial DVD she actually closes this model's eyes a little and changes the angle of the eyebrows to improve the expression. Jane is a real maestro when it comes to refining the look of an eye.

This topic was instigated by a published report of some 'research' by CSIRO (Australian Commonwealth Scientific and Research Organisation). A staff member, Nic Svenson, posed the question to one of the institute's statisticians , 'how many shots do I need to take to be sure of one with nobody blinking?' The answer was duly delivered by Dr Piers Barnes and is shown further down the page.

To social photographers this is a long-standing problem and a number of practical solutions have been proposed. We have also heard stories of clients demanding restoration work for their album images, with the claim that, as a professional photographer, it was up to the image taker to judge the picture timing correctly!

Statistically, the chances of catching a blink are moderate. The average blink lasts about 250 milliseconds and in indoor light a shutter is open for about 8 milliseconds. However, there is a problem with the statistics, they take no account of external factors such as the behaviour of the photographer, the clacking of a mirror on an SLR just at the wrong moment (the eye has just enough time to get itself closed in response to the sound of the mirror) and red-eye pre-flashes are a walking disaster for some subjects. Even when you try all the tricks it sometimes is near impossible. Two tales spring to mind - the writer once photographed a group of musicians in which one girl blinked in every shot (big 'clacky' mirror on a Bronica!) and the eyes had to be 'borrowed' off one of the other girls) and in the other, a photographer actually got through a whole 36-roll of pure blinkers! For the next shoot he got her to close her eyes. Sometime later she was auditioning for Italian Vogue - spare a thought for the Italian photographers!

To alleviate the eye-close in response to shutter noise, Dave Newman wrote in a recent article that he plays music to disguise the sound. This won't work for an outdoor wedding party and two favoured tricks are to move the hand back and forth behind the camera, getting the group to follow the gaze or to simply keep talking and shoot mid-sentence. What rarely works is to get everybody set up, get them to say 'sausages' and, having got all the blinks ready primed, take the shot. Doing this can also freeze the group in a Blair-like rictus smile (...rictus - an unnatural forced grin or grimace - from the Latin, ringi - to gape). 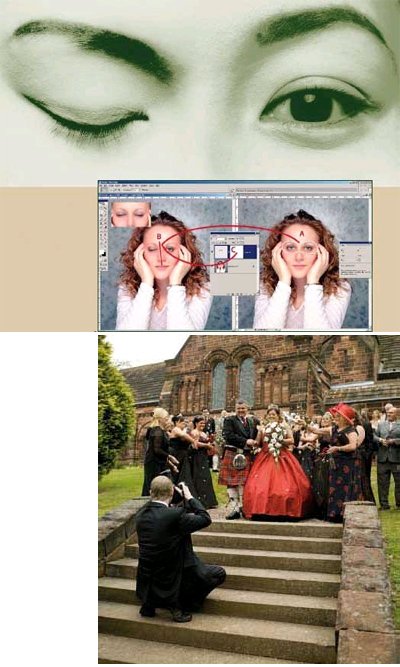 If you give the group something to do, blinkers are not a problem, those arise when you stand everybody in line and don't simultaneously distract them!

Technology to the rescue

Technology can help in a number of ways. We can do the sums and work out the number of shots needed to be reasonably confident of capturing a blink-free image or we can fix it in Photoshop. The University of Electro-Communications in Tokyo announced a camera system two years ago, which can detect the blinkers in their 15-shot burst and then trash the worst. This has yet to come to market as far as we know, but at present, most cameras cannot even manage the 30fps that was being used!

For the statisticians, here are the CSIRO findings. The eye blinks for about 250 milliseconds and the typical shutter duration in poor light is around 8 milliseconds. The graph they produced is shown. With it you look up the number in the group along the bottom then go up to the line (green for good light, black for poor light) then across to read the number of shots you need to be 99% certain of getting one blink-free image. Thus for a group of 20 people you would need 15 shots. This is probably impractical for most situations. Once you get to around 50 people the chances of having a blink-free shot ever are very tiny indeed - over to Photoshop then! A rule of thumb for medium-size groups, by the way, is to divide the number in the group by 2 in poor light and 3 in good light.

The classic way is to find another shot of the subject in the same lighting, drag the open eye across onto the blinker then use a Layer Mask to blend the new, open eye. If the scale is quite big (ie four or five people maximum) then you will have to take more care and may need to balance both density and colour balance of the incoming eye. Any change in scale will also need to be adjusted for. To use this technique you would need a motor drive burst of three or four shots. A sub-group of this problem is a subject with a single 'lazy' eye (say slightly drooping). Here you can lift the eyelid, a technique Jane Conner-Ziser explains and performs in her retouch DVD, or you can copy and reflect the better eye which will probably also require tone, colour and alignment changes.

Photoshop CS3 has the new Layer Align feature, which is going to be invaluable for this work. Even if you are not on a tripod and move slightly, the algorithm will level up the shots and you can selectively mask very readily - see the review of CS3 in this issue. 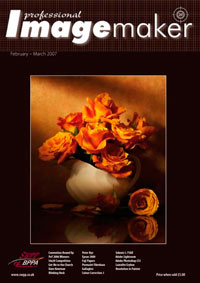