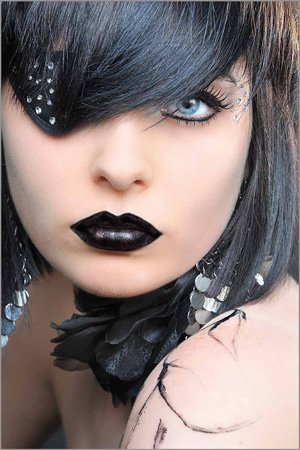 1. Let's get the basics sorted. What is the origin of your name and how do you pronounce it?

Well Mike although I come from the East End of London, and those who have spoken to me may notice a slight London twang. My name is French, and pronounced phonetically Fy-Gee-s my ancestors came over in the 16th century and predominately were Huguenot priests, so had they kept their vows I should not even be here.

2. Why did you start doing make-up for your own photography?Because I got fed up with make-up artists, either they took too long, or they did not interpret what I was looking for. Doing it myself I can adjust anything as I go along, and usually get what I have in mind, onto the model.

3. How does a beginner learn about make-up. What are good sources of information and materials, eg books, DVDs, catalogues, websites?

For a guy it's difficult, collect your courage and tell a make-up artist, why you are interested in make-up, or enrol in a class, but you need to be brave. I have never read a book or watched a DVD or website. I heard one talk at In Focus by Steve Williamson, back 20 years ago, and got inspired. My advice would be getting the best products you can afford. Put on a good foundation and treat the face as a blank canvas. At first it may not turn out quite right, but talk to the models and see what they think, and tweak 'till you get it right. Being bold and different always works well. The one thing you can never learn from books is the imagination. If you have it, the knowledge of make-up can bring those ideas to fruition. I covered half a model's face in Palma ham once to make it look like she had been skinned; the other half had stunning make-up to contrast. That is one idea not yet completed; I will return to it but presently I have put it on the back burner. Finally, be prepared to have jokes made at your expense, but great ideas and images compensate for the comments..

4. Does highly stylised make-up have a commercial angle for you or do you use it to keep your creative batteries charged up?

Both - I find it stimulating; also the models come from miles around. I had one the other week, travelled three hours both ways to have a make -over for her folio. The Mad Hatress not only got to the final of the SWPP but I sold quite a few copies to Germany where some holiday makers saw it, bought it, then their friends wanted copies. I spent so much time translating German emails I almost ended up fluent in the language.

5. When you create a stylised image what is the final output - eg is it for web, portfolio, wall portraiture, poster or what?

Varies, I have sold as wall mounts, and posters for advertising. Artvue used the Mad Hatress as advertising at the SWPP Convention and In Focus last year. Stylised images also make great model flash card front covers as they are made to stand out, and the card has to be turned over to see the rest of the model's images. I have been in an agency where the cards have been assessed just on the one front image and the full extent of the model's ability is missed. The stylised images are used in all the situations you have pinpointed.

6. From where do you develop your picture ideas, your inspiration?

Truth, I do not know, they just come to me, usually about three in the morning, much to my wife's annoyance. She asks me why I am not asleep, and then I tell her that I have this great idea, which is usually a good idea for me, but I am not so sure she is impressed always.

I have a selection of wonderful models always prepared for me to experiment on. They are quite happy that they may not be the one used in the final image. I always respect and have fun with models, they know they can trust me. I have been told I am too kind to them, but they are as important as me. And sometimes they add great ideas to the final image!

7. Do you use an airbrush to apply make-up?

I nearly always use brushes but have hair colour sprays also, but only when very well ventilated. I do use grease paint quite a lot for the dynamic work, because it blends very well, and on one of my shoots of the Snow Queen I blew cornflower onto the sticky grease paint, and got a frost texture, which I was pleased with.

8. What is the main difference between make-up to be worn by a female for everyday use and for use in a stylised image creation? Is it thicker, more highly coloured, sticky, impractical and smudge resistant?

A lot of the make-up I use, is everyday make-up. I would say I go for stronger colours, and slightly heavier, for photography. Mind you some models do wear very stylised make-up at all times. Usually the most naturally beautiful ones, use not very much make-up at all, just some foundation, and some slightly enhancing blusher and eye shadow. For the theatrical work eg the Mad Hattress and The Bride from Hell that is theatrical make-up, but if you are starting out, normal make-up will get you on your way.