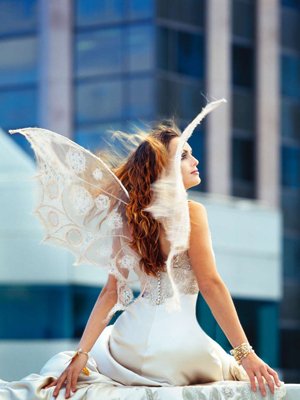 You would not be alone in thinking that these rich and exotic words portray the sensitivities of such movie icons as Greta Garbo or some other femme fatale of the thirties. They were, however, written by Robin Fingher after she observed Denise shooting a 12-page editorial for the prestigious magazine Perth Bride.

Robin appeared one day at the studio of Australian photographer, Denise Teo, offering to assist her with her photography in exchange for the sheer experience of working with one of the most talented wedding photographers in Australia.

He, as well as many other photographers, has beaten a path to her door with the hope that some of her creativity, inspiration and enthusiasm can be shared, absorbed and learned, especially her exceptional gift, which is the ability to see light.

It is Denise's desire to capture true feelings on film, "Those difficult and hard-to-see moments that cross our paths all too briefly". There is nothing electronic about what she does, as she loves using all the knowledge she has gained and working it in the medium of film.

As one of Kodak's mentors, and in an article they wrote about her, they highlighted her abilities as a 'colourist'. "She uses colour, shape and form in a pared-back way, which can range from subtle ambience to the intensity of cross processing. She also has a refined eye in terms of graphics and design, which is clearly evident in her marketing material and in the presentation of her work".

To evoke a feeling in the two-dimensional realm of the photograph is her aspiration. "Still pictures don't hear, they don't smell and they don't taste, but they can see." Denise attempts to convey how a feeling 'feels' and then reproduces it on light-sensitive paper. The emotive content of her pictures has certainly touched many people.

"How rarely does intimacy show itself in the world we live in today?" Births, deaths and marriages are the three rites of passage that we abide by. All of these things Denise has experienced, visually, in her career. Denise works from a 1932 art deco building (formerly a bank, which still includes a vault). She purchased it in 1998 and furnished it impeccably, with items that bring its character to life including floor-to-ceiling lighting.

It is the same year that she won the prestigious Canon West Australian Professional Photographer of the Year award with a submission in the editorial category of a stillborn baby's funeral. The images she produced were extremely emotional and speak volumes on their own. It was a particularly difficult assignment, as she had to work with the child's parents who were understandably in a very distressed state after the loss of their first-born child. Her images, she was told later by them, have been of great comfort and have helped heal their sorrow.

Graham Munro, a well-established Sydney photographer who was judging the awards commented that, in the end, they were unable to look away from the images of grief and loss.

At the same competition Denise also won distinctions in the advertising and wedding categories.