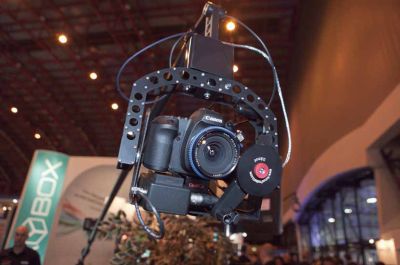 I blame it on India. There I was, all set to go to Focus for the umpteenth year in a row, when the lure of a holiday in India got in the way. So, in order not to disappoint my credit card on its annual outing to buy equipment, I went along to the video equivalent of Focus - BVE as most people know it.

The initial impression on walking into the show is that you have arrived on a giant film set. Focus is small scale - cameras, books, tripods, lighting. BVE is giant scale - rigs than propel your camera into the sky, trucks that let you film on the road, lighting powerful enough to illuminate Buckingham Palace. So, just like for any big show you need a plan.

Since I am heavily into DSLR film making I decided to concentrate on anything pertaining to this area, especially start-up video lighting. One of the great features of the show is the free seminars on topics as diverse as '101 Digital media files: the size, the shape and the frame rates', or 'how to light a set'. The 'Lighting on the Run' seminar was brilliant. Jonathan Harrison went through a classic three point lighting set-up and dramatically demonstrated the ruggedness of Dedolight equipment by kicking one and dropping it, still working, in a bucket of water. Try doing that with the average flash head! Even better was the trick of throwing the background out of focus with a small diffuser. I am definitely going to invest in some of this equipment which should work for both stills and video. And it is low power and portable, so should work from a battery on location. There is a good web site at: http://www.lightingmatters.tv/index.html Adobe had a strong presence, running a constant stream of seminars, always full to overflowing. They are treating the video business seriously and heavily pushed the integration between their packages, allowing you to write a script and have speech to text analysis link that to the actual shooting dialogue. Some of our old friends from the Societies' Convention were there: Canon, with a 5D Mark II on a Cambo rig; Park Cameras; AKM Music; and probably more. 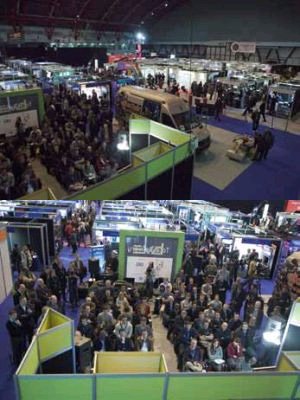 I noticed several things of interest to photographers:

· The current hype in the photography world is around DSLR video shooting. There was plenty of evidence of this in use, but video makers are coming out with new cameras to compete.
· Video makers are just as worried about the DSLR video trend as photographers. One seminar reported that 78% of video makers wanted more training on DSLR shooting. Budgets for equipment and staff are being cut, so DSLRs can help.
· There are plenty of untapped opportunities in the video world for photographers moving into video on a budget. One such is short, corporate videos (training, product, company introduction).
· Stock video is taking off fast. There is currently less competition than for stock stills, but this will change.