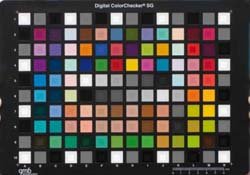 We used our normal colour testing regime of shooting a Gretagmacbeth SG target in daylight (dull overcast) with an exposure of nominally 1/60 at f8 for 200ISO. The target was shot using auto exposure control in both JPEG and RAW formats. The exposure was just on half a stop over-exposed and we corrected the RAW file for colour balance and exposure before analysing the colour error using the Rags Gardner script described in the last issue. The error across the chart was just 2.81ΔE2000. This is remarkably good, right up with the flagship SLRs. Comparing this shot with an as-shot JPEG pointed up the benefits of RAW correction. The JPEG average error across the chart was 7.32 ΔE2000. The JPEG compression on the camera seems fierce, although noise is the main issue. Skin tones are rendered too red with obvious artefacts. The exaggerated saturation only serves to increase the visibility of this effect in skin tones.

Although the noise and JPEG artefacts are obvious when you blow the image up on screen, a much more valid test is to make a print. At 4,000x3,000 pixels, the native file can be output at inkjet resolution (180ppi) at 22.2x16.6 inches - there are a lot of pixels in a G9! To this end we made a print, at proofer quality, onto 17" paper. None of the artefacts was visible at normal viewing distance, although the print showed the characteristics we expected from the colour audit, namely exaggerated saturation and reddened skin tones. Despite that, the print was acceptable for commercial use for the group shots. Detail in the bride's test was quite well rendered. 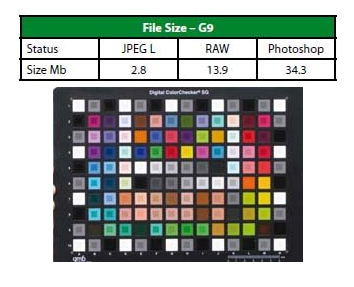 Although the G9 can shoot both RAW and JPEG images, only JPEG may be shot using the camera capture software, RemoteCapture DC. This is not mentioned in the literature and we only found out by virtue of the absence of a RAW setting in the preferences pane for the camera.

It is only when you start to use a camera for a period of time that some of its quirks become obvious. The RAW files will only open in CS3 as far as I can tell, for example (other than the provided software, of course).

The viewfinder is very small, the Live View rear LCD shooting method is very alien and the lack of settings information is very unsettling - I gleefully shot a few fuzzy shots in some woods before I realised that 1/30s and a moving dog were not good partners at 210mm focal length, even with stabilisation. I did however, notice that 800ISO is so poor on noise that you can see the deterioration on the LCD if you zoom in - this camera does not deliver Nikon D3 low-light performance, only to be expected from a chip that measures just 7.2x5.3mm. DPReview describes the 800 and 1600ISO shooting as 'so poor it is pointless