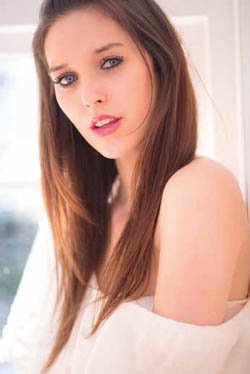 Bounced from a large white wall, the light from the Speedlite has been softened to produce a flattering result.

All the Canon Speedlite flashguns feature some form of angle-adjustable head that allows you to direct the flash somewhere other than straight at your subject. Most commonly, light is bounced from the ceiling, which turns your flash from a small, direct light source into a large, indirect source. However, don't forget that the majority of flash heads turn to the side and even point backwards as well. This opens up not just ceilings, but walls too. Enjoyably, there is not much you need to know to use bounce flash effectively. In E-TTL II the camera will still fire a pre-flash and calculate the flash exposure for you. The only real issues you need to be aware of are if the ceiling is more than a few meters high or the wall has a strong colour to it. In the first instance you may find the flash light is simply not powerful enough to travel up several meters, bounce off a dull surface and then travel down another few meters while retaining enough light to give the correct exposure. In the second case, you'll find that your nice daylight coloured flash light takes on the colour of the paint leaving you with red, green, blue or whatever colour of light bouncing back off the wall.

On-camera flash is often used for it's automation, but to get better lighting you need to move the flash off-camera. In it's simplest form this can be an off-camera cord OC-E3 to allow the Speedlite to be fitted to a flash bracket or held off to one side.

Wireless flash is the next step since long cables create a trip hazard and short cables have limited range. Wireless off-camera flash works with either pulses of light or radio to control the remote flash. Canon used the pulsed light system for over a decade, but has now become the first camera manufacturer to implement radio control for it's flash system with the Speedlite 600EX-RT and Speedlite Transmitter ST-E3-RT. These new radio flash devices are compatible with virtually all EOS digital SLR's.

Pulsed light is more than suitable for indoor use, walls and ceilings will bounce and reflect the control pulses making sure the slave flashes can work almost regardless of placement. Using pulsed light outdoors in bright light is much less reliable and several third party solutions have been developed that maintain the automation but use radio transmission between the camera and the slave flashes. These solutions add an extra layer of compatibility worries, connectivity and yet more batteries. The Speedlite 600EX-RT puts radio control in the flash and it works brilliantly in all kinds of light and weather - the Speedlite 600EX-RT is also weather sealed to the same standard as a 1D series camera.

Wireless flash requires a master device to control one or more off-camera slave flashes. Some EOS cameras such as the EOS 7D and EOS 60D can use their built-in flash as a master to control slave flashes, but often a master flash or Speedlite transmitter is used. Slave flashes are assigned to groups and the master can control the slave groups either as a single powerful flash or group by group for refined flash control.

Combine the Speedlite 600EX-RT and Speedlite Transmitter ST-E3-RT with the latest EOS 5D Mark III and EOS-1D X, and the radio flash system extends the functions available to include five levels of group control, the option to set different flash modes for each group and much more.

The following devices can be pulsed light flash masters:

The following Speedlites can be used as slaves with th pulsed light system:

- Speedlite Transmitter ST-E3-RT as a master, Speedlite 600EX-RT as a master or slave
The list above is not an exhaustive list, several other older Canon devices
can be used with the pulsed light flash system.
About EOS Network - EOS Network are Canon EOS training experts.
Brian Worley and Dave Newton -
Brian Worley and Dave Newton have decades of experience with the entire Canon system. They are regular presenters for Canon and photo dealers across the UK and abroad. EOS Network provides a range of training courses for photographers who want to improve their photography by using their photo equipment effectively.
They are both widely published as photographers and authors.
Visit EOS Network, http://www.eos-network.com/swpp, for exclusive offers and additional free flash tips for SWPP members.