After almost forty years of high end wedding photography, I am saying things these days that I never would have dreamed of saying just ten years ago. For years I was adamant that the only type of equipment for wedding photography was medium format. Most of my career I shot Hassleblads and latterly with Pentax 645, in both cases, using only primary lenses, never dreaming that someday I would even consider a zoom. Of course for the times my philosophy was completely right, during the seventies and eighties we would often sell very large portrait images from a wedding coverage. Beautiful available light portraits taken with a tripod mounted camera were all the rage during those not so far off days. Very few people would ever ask for candid shots of their wedding guests, or "out of control images" in mixed lighting conditions. These days, however, the boot seems to be very firmly on the other foot. Almost no one is asking for those magnificently contrived images that won so many of us all those coveted awards from the major professional bodies. So just what is the preferred medium of today's wedding photographer? Well it seems that many are still clinging on to the great camera systems of yesteryear, I still see a fair number of Pentax 67 and the whole gamut of 6x6 cameras, but for the most part 35mm shows up in absolutely overwhelming numbers, even at the most expensive reception venues, something I would never have seen a decade ago. I have to admit that the miniature camera certainly does have a number of advantages, particularly with many of the hypersensitive and very fine grain films that are currently available.

What I don't see out there, and it surprises me immensely, is digital photography. I talk to most of the photographers I meet at the various wedding venues around Chicago, many of whom, these days, claim to be wedding photojournalists, to justify their 35mm, flash on camera, snap shot equipment. A few appear to be doing a very nice job while others, one can tell, are just cheap and cheerful, Kentucky Fried Picture Merchants. But without exception, their jaws drop open when they see I am shooting the whole wedding digitally. Since I spent all of last year testing digital equipment, I have to say that the only way for me to go is Digital. I have now adjusted my fee schedule to reflect the fact that all social events will be digitally photographed, I have also offered the option, at a greatly increased price, of having film coverage, not that I feel that film warrants the additional fees, on technical or aesthetic merits, it is just that it costs me so much more to purchase the film, have it processed and scanned to make my CD previews. Notwithstanding, that I am old enough to last out the rest of my career on film, without ever looking through a digital camera, but that is not my nature, for all of my working life I tried to move, not just with the times, but slightly ahead of the times. For younger photographers, they had better not bury their heads in the sand on this one. It would be rather like predicting that the sun would rise in the east tomorrow, if I were to say that later this year in Cologne, at Photokina, the photographic world will be buzzing around the digital imaging booths.

My age apart, I have more than just one motive for wanting to be digital, I sell GraphiStudio Italian albums, I just couldn't imagine sending my negatives overseas on a regular basis, if negs went astray I would be sunk, if a CD is lost I would just burn another. Six megapixels facilitate the making of Graphi's biggest book without appreciable resolution problems. Manufacturers and Labs still have sizeable sums of money tied up in optical printing and processing machinery, but in addition to that, every major processing house in America has invested a fortune on technology upgrades to be ready and waiting for the digital revolution and it is no surprise to note 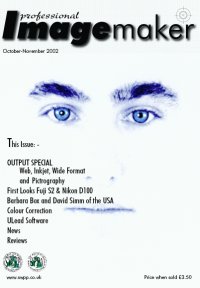