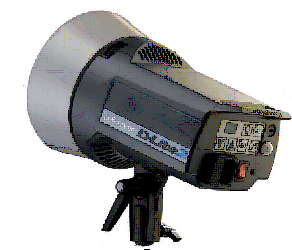 The D-Lite is a lightweight, portable, high-quality flash head built to the usual exacting Elinchrom standards but cut down to the minimum so as to make them as portable as possible. This is always a compromise, but the Swiss engineers seem to have got the set-up just right. They have, for example, dropped the forced air cooling from the D-Lite in order to save weight. This may prevent you from battering away if you have a snoot on the head but really, for the type of application the unit is designed, high speed repetitive shooting is not a requirement (it still kept up with a Nikon D100 shooting RAW files by the way).

Flash power requirements are highly dependent on the application. My own set comprises 1500-joule, industrial strength heads. These are intended for shooting 5x4 at f64 on slow film - use them on a portrait shoot and you would be scraping the subject off the backdrop and coaxing terrified children back into the studio! The D-Lite is a more modest 200-joules which is just perfect for shooting in more domestic surroundings, typically found at the bride's home or a reception or for shooting home portraiture. The advantage of the lower power is in size and weight, the two-head kit is light, compact and very portable. The kit, shown in the photograph, comprises the following and costs £395 ex VAT:

The heads are compatible with most of the Elinchrom range of light modifiers ensuring that you could continue to use the kit if you were to expand your inventory. In the typical set-up we tested, we had a domestic lounge with a white ceiling at 9 feet and a flash working distance of 2.8metres. This gave us a working aperture of between f2.8 and f11, depending on the light modifier, using the lowest setting of the Nikon D100 of 200 ISO.

Rather than shooting a pretty young thing and making comments about the light quality we set to and did the boring bit of hammering the system and actually measuring the output. Of primary concern was the repeatability of the flash output, the consistency of the step increments and the stability of the colour temperature as the flash power was incremented. It is pleasing to report that the D-Lite was truly superb on all counts!

We measured the flash output over a number of flashes (up to ten in succession). Each flash was within a tenth of a stop. When we incremented by a tenth the meter gave us a tenth more or less - magic! This is of much more value than might at first seem. Once you have your base exposure sorted all you need to if you want to change either aperture or lighting ratio is give the button the required number of clicks - there is no need to re-measure with your light meter because you know it will do what it says, a 2-tenth adjustment means just that, no more, no less! The only precaution you need to take is to allow the unit to auto-dump charge if you increment down. This is confirmed with a reassuring beep and takes 20 to 25 seconds from full power to lowest power - if that is too long just fire the flash off manually.

We also examined the variation in colour temperature over the output range. This too was excellent. Flash-toflash variations were never more than 50°K representing a single RGB point in Photoshop - there was actually more variation around the 2" Macbeth swatch than that. The variation as we incremented from lowest to highest power was 100°K, again a trivial variation.

Without specialist gear this is difficult to measure. However we did make some exposures of the Macbeth Chart and audit the results. The camera will have at least as much influence on the quality of these data but suffice to say that we got average errors from a RAW file off a Nikon D100 with a 105mm MicroNikkor of 6.3 ÄE Lab just using the white balance, improving to 4.1ÄE when calibrated using ACR (see the Quality Matters section this issue). This is very much in line with the best data we obtained using pure daylight as a source suggesting that the D-Lite is pumping out spectrally pure light, certainly adequate for photographic use.

We liked this kit a lot. It is well thought out and the components are well matched. The simple things sometimes give the game away but the synch leads and power leads are just right for shooting in the intended environment - you can, for example, get both power leads to a single socket on one side of a domestic lounge. The units are ideally rated for portraiture and while you can do good work with the brollies provided, you also have access to the Elinchrom range, should you need more sophistication. If your business expands and develops you are unlikely to trade-in the D-Lite kit, at £400 you would be comfortable leaving it in the car for those emergency shots you had not planned for