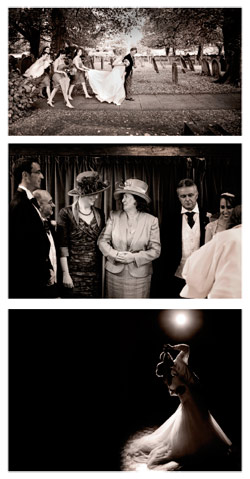 One of the images that was in my LSWPP panel was of the bridal party approaching the church (right).

This image is all about storytelling to me but it's also a good record image too. It shows the care of the father and the nerves of the bride as they approach the church. I work alone, so have to make a call on the day whether to stay inside the church and shoot events there when the bride arrives, or shoot the bride entering the church etc. Choices like this are very important. I'd seen the path to the church many times and knew there was an opening between the trees that they would walk along. I would never ask the bridesmaids to hold the dress, or the bridal party to walk or behave in any way - but on this occasion they just did it perfectly and I managed to get the shot in the exact position I had visualised it in my head. I then scuttled off to the front of the church.

Another image that was in my panel is the next one. Again, one of my favourite images from last year.

This image really speaks to me about the relationship between the two families. I'd been told, as we often are, not to photograph the signing of the register, but I had noticed to two mothers were standing next to each other and I really wanted to get a shot of any kind of exchange or interaction that may have occurred. I knew I couldn't photograph the signing so just waited. In the end, they linked arms and it was just the proudest look of any parent that came out - and I shot three frames. In post processing I edited the image to highlight the two mums rather than the more [peripheral in the frame] images of the bride and groom who are at the edge of the frame.

This next image was taken at a winter wedding at the end of last year. It was literally the last shot of the day for me and it very nearly didn't get taken. It had been a long day, and the snow was falling outside so I knew I would have a long journey home. The bride and groom did their first dance and it was a fairly standard shuffle-and-smile affair. Certainly no Dirty Dancing moments or anything particularly exciting during the dance itself. I was using ambient light only and I knew that the DJ light (above the bride and groom in the image) would act as a great rim light if I got into the right position. Which I did. As the dance was drawing to a close I still hadn't captured anything from the angle I wanted and was about to give up when the groom suddenly, and completely against the run of the moment, dipped his new bride. The image was there for the taking and I took as many frames as I could before they got up. I didn't want to use flash as it would ruin the rim lighting and expose all the people who were behind them as well. The image is slightly soft - but that doesn't bother me at all. It was shot at ISO 12800 on a 35mm lens at f/1.4. It was extremely dark and I had to pre-focus on the square tiles on the floor in any hope of getting a picture. As it turned out the picture, in my mind, was worth it. It was fortuitous of course, but you can never predict any moments with accuracy.

Whilst clients pay me to take documentary images at their wedding, they do of course expect the standard 'must have' photographs of the day also. When doing these shots, I still try to do them with a storytelling feel and will often try to find slightly different angles if it adds to the frame.


Please Note:
There is more than one page for this Article.
You are currently on page 2 Contact Kevin Mullins