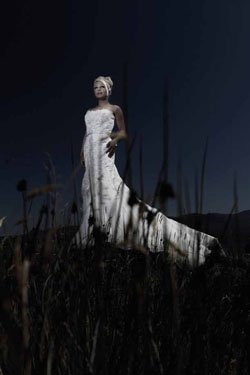 When I arrive at a wedding venue for the first time I quickly build up a plan in my head of which locations will be used, and how they will be lit, so that, when the pressure is on, I can quickly work my way around. My average wedding usually consists of 30 minutes with the bride and groom. I rarely need more than that, and this means you're not using up their entire day for photography and they get to enjoy themselves. I've lost count of how many times I've heard 'about the photographer at the last wedding people went to', taking the couple away for hours and spoiling the day.

So, how to add the drama? These were bridal fashion images I was commissioned to shoot in the summer.

This first shoot I did, was at a very remote island off the west coast of Scotland. Tanera Mor is part of the Summer Isles, and is the only inhabited island in the group. I was looking for a location to shoot some images for a local bridal shop, and wanted something a bit different, so after trawling the internet I found a boat trip to the islands and booked myself and model, Natalie. On the day, it looked like it was going to be miserable - dull and grey throughout the entire three-hour journey to Achiltibuie, and add to that, a travel-sick model, and things weren't looking good. 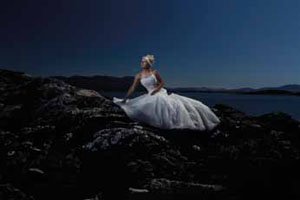 As if by magic, about 15 minutes before the boat was due to sail, the weather broke and the sun came out. Within half an hour it was TOO bright and I was moaning again. The sky had cleared and there wasn't a cloud to be seen. This brought a different type of problem as it was going to be tricky to add the type of mood we wanted to the images. I'd hoped for clouds and a bit of atmosphere in the sky. We were under pressure as the boat only landed at Tanera Mor for an hour and we had to walk to any locations. I'd not seen the island, so it was a mystery as to what would be there. The pier area was just perfect, so I quickly set up so we could get some early images in the bag. The bright sun meant it would be hard to make the sky look dark and dramatic, so I had to put a polarising filter on the lens - that allowed me to shoot at 1⁄250s at f5.6 and get the Quantum on full power, and as close to the model as possible. Within a few minutes we had some really strong images, so we played around with that setting for about 10 more minutes before moving on to look for somewhere else. We couldn't go far, as we were restricted by time and lack of transport, but I spotted an old, ruined croft up the hill and we set off to try it out. It was perfect and we shot some more images there, before heading back to our boat, and even had time for a coffee and cake before we left. Not bad for an hour!

We then decided to do something a bit different for the next part of the shoot. There's a steam railway that runs from Aviemore and I'd seen one of the stations before and noted that it had a yard, full of old, ruined steam trains and carriages. I managed, after a few discussions, to get access to the yard for an hour, under supervision, and off we went again. I managed to get a 1940's suitcase off a friend and this added to the vintage feel we wanted.