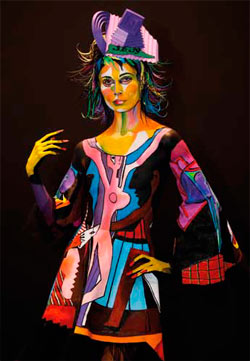 Natalia Pavlova's recreation of Picasso's Dancers. With special thanks to Eva Smit of Holden and Smit Ltd who brought the work to our attention and to Messe Duesseldorf for use of the image.

This is the 60th issue of Professional Imagemaker. We did think about doing a fancy silver cover but the post-Convention, post-Focus scramble hobbled our ambitions, along with a desire to have something spring-like on the cover to match our spring nature theme in this issue. Jon Ashton's courting grebes fit the bill nicely and deserve their place in the sun, more especially as this is being written on the first day of spring!

On the equipment front things seem to be looking up over the past quarter. Apart for the 'Olympics-ready' Nikon D4 and Canon 1DX cameras, there are the Canon EOS 5D Mk III and the ground-breaking Nikon D800. Not to be left out, there is a developing trend for really high performance compacts, which are capable of reproducing the performance of DSLRs of just a few years ago. The arrival of the high pixel-count mobile phone has not dampened the market desire for a better compact and when a DSLR is just too much space and weight these new generation compacts can turn in a professional-level performance.

Every issue there is something that pops up to tweak our creative thoughts. This time it is body painting and, in particular, the work of Russian superstar artist Natalia Pavlova. She recently gave a wonderful demonstration at the Make-up Artist's Design Show in Dusseldorf, where she recreated Picasso's Dancers. This followed from her Kryolan 2011 Callendar which included 12 artist's styles including Picasso's painting of Dora Marr weeping (and let's face it Dora Marr had lots to weep about putting up with that old goat!). Such talent deserves more exposure and we have already started a feature for the next issue - watch this space!

The way in which mobile phones have penetrated every corner of our lives is one of the key features of 21st century living. The figures are staggering. Apple is shortly to reach the 200 millionth sale of an iPhone, having passed the total Mac sales (of 28 years) in just five years. At 60 million, the iPad is half way to the 28-year Mac figure in just two years, and rising on an even steeper curve. It is little wonder that Apple sometimes seems to have only a marginal interest in the graphics industry.