Two sides of the commercial coin have been starkly shown during the period between issues. On the dark side Ilford have gone into administration with the loss of hundreds of jobs in the UK and the prospect of a complete withdrawal from the Mobberly site in Cheshire. Although the inkjet arm of the business has been keeping it afloat the company have obviously decided to pull production back to continental Europe and take the money for the prime building land nestling under the second runway of Manchester airport.Thus ends an illustrious era of monochrome photography stretching back tens of decades. It is a sad day for all concerned both users and the hundreds who have lost their jobs.

On a more positive note, Nikon have demonstrated their commitment to film with a new F6 and also their ongoing progress in digital with their D2X. Canon have joined the party with their D1 Mk2 and Fuji have uncovered their S3 Pro. All of these cameras are significant improvements on their predecessors so it is going to be an interesting Photokina where we will get our hands on them hopefully - more of that next issue. 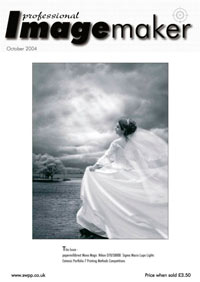