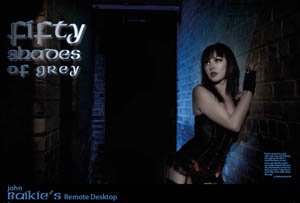 Wizards for a few years now but this was my first try out of the new units. I decided to go beyond my usual one-light set up, in order to properly test the units, so used the Quantum Turbo flash along with two Canon speed lights. The new units allow you to isolate each zone from the camera, so this would enable me to shoot with one, two or three lights, without any fiddling around, or moving and disrupting the shoot. The new Pocket Wizards have 32 channels and work over much longer distances than the previous models. They can also be easily switched between transmit and receive mode so can be much more versatile on a shoot. It also means no need for separate units for trigger and receiver.

After being sick to my back teeth of hearing so many desperate housewives going on about Fifty Shades of Grey on Facebook, we decided to add a touch of Mr Grey to our shoot, finally getting a use for the shackles and chains which I'd bought off eBay.....For just such an occasion.... (John this really has got to stop - do you have any idea how long it is going to take to drive from the Wirral to Inverness Jail on visiting days? Ed.)