This is the 22nd paper in the Hahnemuhle FineArt range. We obtained a beta sample from a preproduction run of the media and so no company profiles are yet available on the website. We therefore profiled the media ourselves for testing on the Epson 3800 used throughout the baryta trials. It is about the fifth new paper to arrive this week alone and so we are running out of new things to say. However, this is a true baryta paper (ie it actually has a barium sulphate-based coating).

FineArt Baryta is a 325gsm, 100% Alpha cellulose media with an 'ultra smooth' surface. It has a calliper of 420 microns and is brightened with OBAs. The base colour is about 4 points towards blue-magenta, ie cool. It shares its substantial grammage, in second place, with Permajet Royal and Epson Traditional Photo Paper.

The gamut volume measured at 879,892, at the high end of the scale for this class of paper. The brighteners depressed the audit statistics slightly especially on the skin tones and when compared to its own Hahnemuhle stablemates, nothing that the eye would detect on a separate viewing though. The Granger Chart was smooth and there was no evidence of bronzing or differential gloss. The print was touch dry immediately it came out of the printer (using Photo Black ink). The average error for the Macbeth colours was 4.6ΔE Lab/2.99ΔE 2000. None of the statistics was best in class although you should not read anything into that, as all the baryta papers behave in a nearidentical manner. 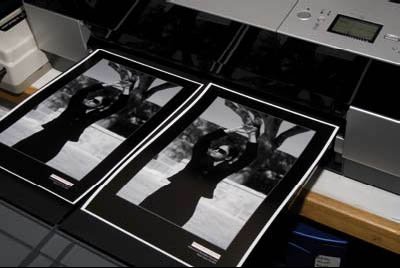 In side -by-side testing there is little to choose between the Hahnemuhle product and the Lumijet. You can, however, feel the difference if you pick the prints up, or do careful comparisons.

The literature highlights the monochrome performance and our earlier remarks on this subject are still valid, this is a great paper for colour or monochrome. The Dmax was 2.25 and the profile mapped the colour effortlessly to the base paper colour. The greyscale linearity was arrow straight right down to the deepest shadow at 4.83% luminance. The bulk of the error component was in the lightness channel of the greys, the hue and saturation errors were very low indeed. Overall the profile mapped the tones about 2½% too dark. The shadows blocked visually at 20 RGB points. Metamerism was low at 0.9 ΔE Lab (D65 to Tungsten at 50% grey).

Overall then this is a useful addition to the true baryta media available to the user and worth a good look particularly as it carries the Hahnemuhle name.

White Pearl 260 Lumijet is the 'reserve team' for Hahnemuhle, a brand name they took over some time ago. They continue to develop its product line-up and have recently added these two 'baryta-type' papers. Generally, the Lumijet range are offered at a more competitive price and are slightly lighter in grammage and this is so for these two. Making a direct comparison between FineArt Baryta and Photo White Pearl showed the FineArt Baryta to be superior on image depth (Dmax was 2.19 compared with 2.01 for example). The image tone was very similar and when viewed alone most users would be happy with the Lumijet, providing you did not let them see the Hahnemuhle big brother. You could envisage a situation where it might be prudent to use the Lumijet as a proofing material for the weightier Fine Art Baryta. We cheated for our tests, to save time, and used the FineArt Baryta profile for the Lumijet, not ideal, but we were struggling under the weight of profiling and testing!

The Natural Pearl 260 has a base white on the cream side of neutral, a little less creamy than Photo Rag Pearl. When viewed alongside any of the brightened, cooler products it is quite obviously warmer toned and would enhance a monochrome portrait. The purists will welcome the lack of optical brighteners. The Dmax is sacrificed and lies at 1.92.