Attendance at Focus on Imaging this year was a little topsy-turvy. Sunday, normally frantic, was not as busy as previously, Monday, normally quiet, was much busier. Overall, the published numbers indicate a very small increase in attendance. With so many more on-stand demonstrations and talks it is likely that people were being sucked away from the isles and for most of the time moving about was difficult but not impossible! On most days it became quiet after about 4pm, but prior to that, those punters in the aisles seemed to be in spending mode, certainly the dealer stands offering hardware were often surrounded by lots of people and in some place queues had formed. Business was reported as brisk. The Societies certainly had a busy week with a record number of new members signed up and a busy schedule of talks and demonstrations at the stand. In terms of product there were some things that were truly new. Epson were showing their R3000, the first opportunity for the public to see it in operation - we even managed to make a couple of test prints in one of the quiet spells! Epson were also featuring the Digigraphie accreditation system for people who sell and make fine art along with a first view (for some) of the Stylus Pro 4900. Nikon had a swanky new stand which was greatly admired, a much more airy environment than their previous fortress. The D7000 was a pull for the enthusiasts, along with some new models in the Coolpix range. 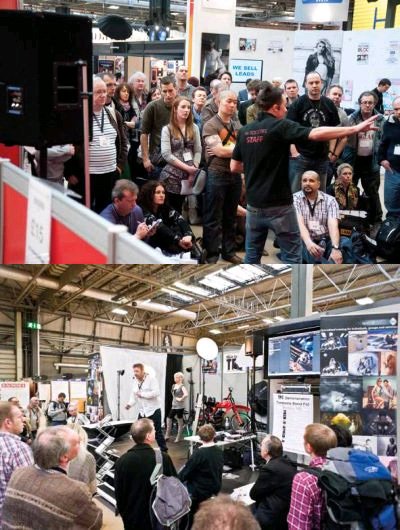 On one of the small number of forays away from the stand we managed to get a demo of the Reflectmedia, green screening rig. This consists of an on-axis, highly directional green LED illumination which projects onto a specially made reflecting backdrop. Normal illumination is used on the subject. They managed to transport your editor to the Coliseum in Rome in matter of seconds and the rig looks set to be a hit for the event photographers. Tom Lee is investigating for us as this is being written.