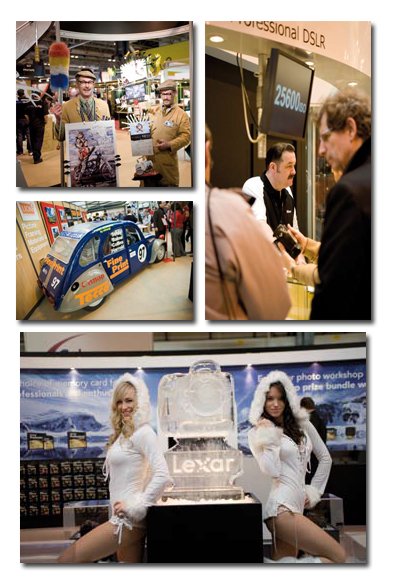 Through the lens of Tom Lee's new Nikon D3

Focus was the usual scramble, along with small amounts of sleep, large amounts of alcohol and huge amounts of dashing around. This year we had the added bonus of an earthquake in the middle of it all. The postquake discussions divided into those who had not yet gone to bed and felt it, those who had gone to bed but were sufficiently cogent to be awakened, those who had passed out and felt nothing at all, and those who were so dog-tired that even a Richter of 5+ could not rouse them!

In terms of attendance, Sunday and Monday were frantic, moving around the aisles was actually quite difficult. Tuesday and Wednesday seemed quieter. Lots of 'stuff' was being sold and some stands reported running out on Sunday. Most people seemed happy. Inkjet and associated products seemed to be doing well, Epson reported lots of printers being sold and the paper suppliers were forever dragging more stuff in from the warehouses. As SWPP and BPPA we did well, with plenty of new members and a steady stream of visitors to attending the seminars. The official figures indicate that attendance was up to 33,437 an increase of more than 1,400 compared with the record total of 32,019 last year.

Many of the stands had organised seminar (or short talk) space. Apple had gone the whole hog and had an 'open air' classroom equipped with Macbooks and tutored by Terry Steeley. Aperture was the main topic as far as we could see as we flew past. Canon made a welcome return with a big presence but Adobe were conspicuously absent - it is somewhat strange that a company that sells their product to almost every attendee should choose to absent themselves from the proceedings. They had passed the responsibility to Rapid Group.

Brand new gear was very scarce, certainly no show-stoppers were announced. Nikon had made their big push earlier in the year so as to be ready for the Beijing Olympics and the much admired D3 and D300 were being enviously handled by the enthusiasts - many of the professionals had already taken the plunge on the back of the complimentary reports (including Professional Imagemaker's). Tom Lee certainly found the high ISO capability advantageous in the dim light of the NEC halls (sometimes 1/30 at f2.8 and 800ISO). Bookbinding and short run books were present in some force for such an esoteric occupation, but making your own limited edition book is now relatively inexpensive and looks like making an interesting article for the future. To complement this there was the usual array of album makers and software vendors for album design. Corel were sporting their new version of CorelDRAW, out just in time for the show as version X4 and reviewed in this issue.

The stands had employed some of the usual tactics to attract the attention of the passers-by. Lion had the owner's racing 2CV, in very sporty livery and a full-harness seat that probably cost more than the vehicle itself. Sadly we were not allowed to race it around the aisles.

Lexar had an ice sculpture (of a camera, not a compact flash card) with two shapely Eskimos to keep both it and the passing photographers warm - they certainly caught the eye! Our cover-girl from the Convention, Katie, was busy and popped up on stands around the hall to work her charms for the enthusiasts. Olympus had a busy stand along with their regular and exceedingly beautiful model; Greg Connell was present, but thankfully without his wig.

As ever we found some interesting gizmos hidden away. Top of these was the Delkin ImageRouter which is able to download four compact flash cards simultaneously and route the files into a back-up archive- if only we had had one of these at the Convention, Walt Malone and McNamee could have been in the bar an hour earlier each night!

[an error occurred while processing this directive]