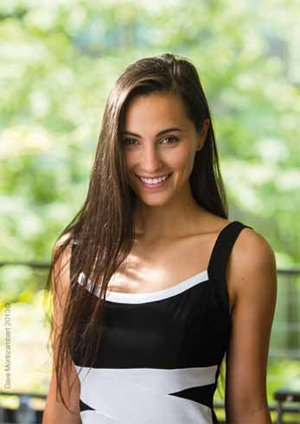 To create dynamic images we are always trying to squeeze as much depth into them as we can. When we look at our world, our eyes and mind create a 3D illusion of that scene. In reality we don't see in 3D at all, we see 2D stereo - two slightly offset two-dimensional images (our eyes are around three inches apart) that our brain converges together to create the look of three dimensions. If you don't believe me, try this test (when you are not driving or operating heavy farm equipment): stretch your left arm straight out from your body, then point your index finger (not your middle finger) up to the ceiling (as if to sign the number one with sign language). With your left arm and finger frozen in position, duplicate the same with your right arm and finger, only bend the right arm so that the right finger is half an arm length from your eyes. With both eyes open and with your head straight on to your arm/finger array, focus on the near finger, notice how the far finger is out of focus and is doubled yet the near finger is singular.

Now focus on the far finger, notice how the near finger is now out of focus and doubled while the far finger is focused and singular. I can't stress how important it is to make sure you do all this with both eyes open. I just tried this little demo myself to double check that I had it right and couldn't get the unfocused finger to double, not even after four scotches! I soon realised the problem - I only had one eye open!

Once you have it right, try the exercise again looking at the near finger with both eyes open and then close one eye; apart from the far finger morphing back into one finger again, notice how your perception of depth melts away - with two eyes open we have binocular vision, with just one open we have monocular vision. A camera sees like you do when you have one eye shut - it sees a single 2D image. So by working with a monocular device, we lose the illusion of depth, but we can trick the viewer of our images into thinking they are seeing depth through good lighting (dark tones recede, light tones come forward naturally creating depth) and by exaggerating the natural convergence and divergence of subject lines as well as exaggerating near and far size relationships of objects in our photo, through careful choice of viewing distance and angle. 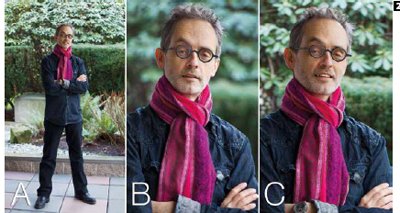 There is one other way to enhance the illusion of depth, and that is depth of field (DoF) - if you set your camera to a wider aperture opening you will have less in focus. If you focus on the subject to make them sharp, it is possible to have the background and foreground become soft or somewhat out of focus. This creates the illusion of depth in our photos; in real life when you focus on an object with your eyes, the areas in front and behind that object are out of focus. With the aforementioned monocular/binocular finger demo you probably noticed that when you focused on the near finger, the far finger went soft and the reverse when you focused on the far finger. This occurs because our eyes work with fairly shallow DoF; whatever you focus on becomes sharp and everything else starts to go soft. DoF plays an important roll in the various illusions I use in my photography, for instance, in my recently released DVD, Dances With One Light, I worked with shallow depth of field to help create the illusion of model Sadie May hanging out on a sunny day outdoors in a garden or park, see Image 001. Truth be told, she was photographed indoors on the sixth floor of an office tower using my simulated sunlight technique. This image has so much depth that it almost seems like you could reach in and touch Sadie. Apart from the light sculpting her form, it is the shallow DoF provided by the f 4 aperture opening that distances the background from her. This shallow DoF not only pulls her out from the background, but hides many telltale signs in the background that would give my illusion away. To learn more about how I did this shot, check out my Dances With One Light DVD.

We all know that larger aperture openings render less DoF and that smaller openings render more DoF, but why is it that some images appear to have more DoF and others less, even though they were shot at the same aperture?