"...without exception, the most accurate print you are ever likely to see of your original...."

Being a magazine we frequently become involved in discussions about proofing for output. One name crops up universally when discussing proofing, GMG. They are a German-based software company specialising in products for precision colour reproduction. And precision is the operative word, a correctly made GMG contract proof is, without exception, the most accurate print you are ever likely to see of your original.

The level of accuracy (usually less than 1ΔE₀₀ over the test target) is more accurate than any social photographer is likely to need in their day-today work, but disputes always arise and the ability to create an accurate and certified proof can be very useful in resolving such matters.

Such accuracy comes at a price. GMG's normal territory is the press and pre-press establishments which are quite used to shelling out vast amounts of money on their facilities. The cost of a GMG solution (there are many options) runs to a couple of grand for starters, so you had better need the accuracy before you lash out for it!

It is one of the curiosities of the Mac-based graphics world that RIPs in general and GMG in particular are based around various Windows operating systems. ColorProof has installs for XP Professional (SP3), Windows Server 2003 and 2008, and Vista. No doubt the programmers are working hard on Windows 7, like many others, GMG were unimpressed by Vista!

The software is dongle-protected which normally restricts either the size of the printer (eg, 17", 24", 36", etc) and/or the printer model. If you own an older Epson model such as the 4800 this will perform admirably using a GMG RIP so there is no need, perhaps, to invest in a new printer.

The input images to the GMG RIP are based mainly around pdf workflows, but JPEG and TIFF files may also be printed. An 'output profile' is used to mimic the device that the proofer is trying to mimic. This might typically be to a FOGRA 27 or 39 data set to mimic highquality press output (such as used for Professional Imagemaker). Alternatively a lower-quality output such as newspaper might be imitated.

Setting up the proofer is quite daunting. We chose the hero's route and attempted to do so unaided (GMG normally offer training). We followed the on-line help instructions for manually setting up a simple workflow.

The program uses SQL Server Express to run itself and this must first be running to allow GMG ColorProof to start. This took us a few goes to get the hang of; certainly on our XP box the software is quite pedestrian and you have to slow down and give plenty of time for things to happen before you panic and start random mouse-clicking!

The system must first be calibrated which is a wizard-driven iterative process. In other words you make a test print, measure it, the program does some sums and has another go (hopefully better). You then print again and measure again, the keep going until everything has been tweaked to the required standards of accuracy. The list below shows the progression of the calibration as the printer was adjusted and brought into line.

This calibration was saved within the system to control future printmaking at these settings. It is noteworthy that despite using Epson Proofing Paper White Semimatte, (effectively a 'rogue' media) we obtained a contract-grade proof with our very first print! After our previous struggles with RIPs (and we have tried many) the result left us a little surprised (stunned actually!) - could it really be this easy?

Anticipating that we might have fooled ourselves we took the proof and measured it using a completely different set of software solutions. The first Hoecker Colour, is a Mac-based certification system; for the second we simply hand-balled the data using a mixture of X-Rite ColorPort, BabelColor and Microsoft Excel. Our fears were unfounded, the proof really was a good as we first thought. To prove it was not a fluke we then ran another print using a totally different image (the cover from the last issue). 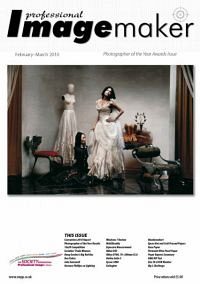