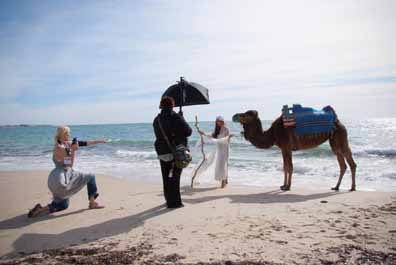 The second part of the week saw Clare Louise, an exceptionally creative young lady, who shoots her client's fantasies. She had her hard working model parading along the beach on and with a camel; trussed up as a mermaid, amongst other things, leaping in and out of the Mediterranean Sea. Clare used the very portable Quad Lighting from The Flash Centre to enhance her images - the final results from her and indeed all the PTO tutors were quite stunning! Stuart Wood, an enterprising and likeable documentary image-maker enthralled delegates with his take on photographing people in situations for magazines. Dramatic lighting and the use of the surroundings again featured in his stylish story telling images. Bella West worked outdoors and used some unusual locations with her young models to make some memorable images; she uses space to great effect with excellent composition and backgrounds to enhance the final result - Bella, like all the PTO tutors proved to be a true professional. The final tutor had travelled all the way from Utah in the United States of America to put on the style for the PTO delegates - the awesome looking Kenneth Linge who looked more like a prize fighter than a photographer enthralled delegates with his fantastic wedding lighting and posing using an exceptionally co-operative young bride and groom who PTO had brought out to Tunisia with them.

The week concluded with two of the tutors presenting 'Super Classes' of four hours duration each on their chosen subjects; attended by between 10 and 12 enthusiastic delegates keen to maximise their learning before the legendary awards event that evening, where prizes were presented to the winners. The PR competition winner was the inimitable Morag McDonald who won a Fuji camera for the second year running. Delegate Tereza Condon won the superb Epson printer for her chosen image in the popular Photo Art Competition. The Main Photo Competition winners included: Portrait winner Liz Roberts; runner-up: Garrett Hayes - a non-professional delegate, Wedding winner Morag Macdonald who also took the runnerup place; Winner of the Open category was Helen Spiegl. Runner-up; Valerie Duncan - a first timer on the course. The PTO Photographer of the Year for the second time in three years was Liz Roberts; her husband Ken won last year - what a dynamic duo! 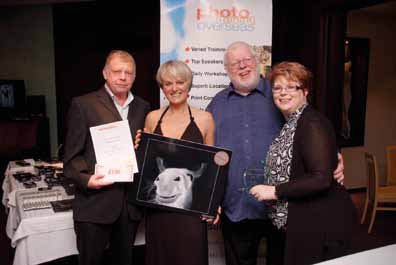 The response from attending delegates and tutors alike was that this must have been the most successful PTO ever on the basis that tutors gave of their all and held nothing back, with inspirational, motivational training that has become the key of these annual events - then we seem to hear that statement with each passing year - maybe, just maybe, this phenomena will go on and on receiving accolades such as this.

The destination is Costa Teguise in Lanzarote at the Beatriz Costa Hotel & Spa from 27 January - 3 February 2013 and the exciting varied tutor line-up is as follows:


Please Note:
There is more than one page for this Article.
You are currently on page 2 Contact George Dawber