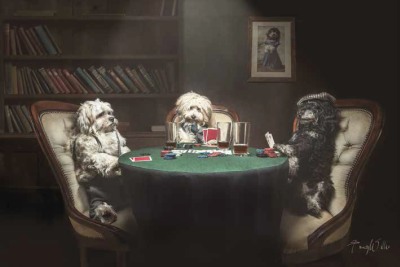 There's More To It Than Look!
We showcase here the work of two of our members, Tracy Willis and Alistair Campbell. They contrast brilliantly as Alistair works up his scenes with complex propping, make-up and lighting, and uses no Photoshop at all, getting his colour contrasts and emphasis using the ACR sliders off the Camera Calibration tab. Tracy relies on as many as 60 Photoshop layers to compile and adjust her complex images with a huge amount of skill. Neither way is 'better' or more 'correct' than the other, they are what they are. In terms of the two images I have selected, some of the similarities are striking; both feature a drawing room setting complete with piano. Both have lamps in the background and pictures on the wall. In both cases the subjects are brought to prominence by the dark subdued background contrasting the more brightly-lit main subjects. Both images share the same time period, Alistair was after a Great Gatsby Art Deco homage style series, Tracy's series give more than a nod to C. M. Coolidge, the creator of the Poker Dogs series of paintings from around 1910 onwards, but more on that in a moment. 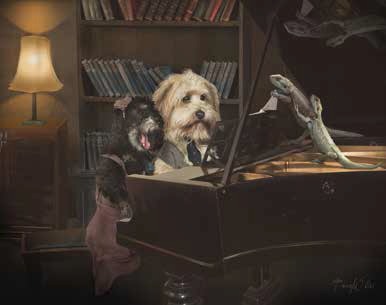 As we said at the start, Tracy's series of anthropomorphic dog pictures makes more than a passing reference to Coolidge. The image below was originally entitled "Judge St. Bernard Wins on a Bluff" but now known simply as "Waterloo"; the pictured work is one of a 16-painting series of anthropomorphic dogs commissioned by the Brown & Bigelow advertising company to sell cigars. The artist was Cassius Marcellus Coolidge who became known as C.M. Coolidge or "Cash" Coolidge and primarily known for his "Dogs Playing Poker" series (although only nine of the 16 actually feature the dogs seated around a card table). Brown & Bigelow commissioned the series in 1903 and Coolidge completed them over the following decade. "Waterloo" dates to 1906. Some of the compositions in the series are modelled on paintings of human card-players by such artists as Caravaggio, Georges de La Tour, and Paul Cézanne. In all cases the cards shown in the painting have great significance, indicating rare luck through to downright cheating.

The two best-known paintings in the series, "Waterloo" and "A Bold Bluff" (which was also called "Judge St. Bernard Stands Pat on Nothing") both featured a Saint Bernard named Captain, who belonged to the artist's friend Theodore Lang, a noted 5th Avenue florist. Auctioned as a pair in 2005, the two "St Bernard" paintings from the series sold for over $590,000. (The previous high for a Coolidge work had been $74,000.)

A website dedicated to the paintings of dogs playing poker, and their artist, Cassius Coolidge can be found at http://www.dogsplayingpoker.org/