Innova produce a wide range of inkjet materials which we hope to feature in a later issue of Professional Imagemaker. Here we concentrate on the FibaPrint range of baryta-like media. There are five materials in this group.

Initially we downloaded profiles from the Innova website (www.innovaart.com). They were built using the Eye 1 spectro on 288 swatch targets. The profiles were defectively tagged and could not be opened by any of our gamut volume measuring software. Time did not allow us to perform much bespoke profiling, but more about that later.

The results using the web profiles were quite poor. The Granger Chart showed a lack of subtlety in the greens, extending into the cyan region. The yellows were generally over-saturated, the prints too dark by between 5 and 7.5%. The flesh tones were rotated towards yellow and desaturated by between 5 and 10%. The statistical data were also poor. This reflects on the profile building, not the inherent paper qualities - as you will read shortly, the paper performed admirably by the time we had got our teeth into it. The statistics are tabled at the head of this Paper Chase and are probably typical of what you might achieve using downloaded profiles. Our test-bed Epson 3800 is typical of its make and the majority of its sibling 3800s perform in a similar manner. Some perspective is needed when interpreting these data though, some users might be happy with the results, we just knew that we could do better. 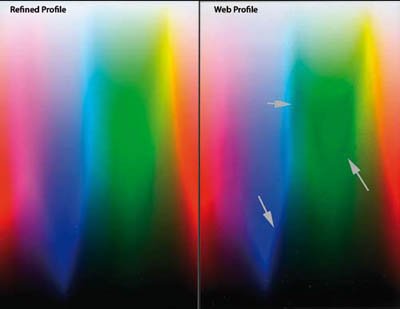 The errors in the hue when using the web downloaded profile are shown by the blue diamonds. Note how bespoke profiling has tightened the errors (red diamonds) so that they are much closer to the origin of the graph. The original colours are those of the Macbeth Chart and they are arranged around the colour wheel. Errors closer to the origin (zero zero point) are better.

This material is new and, short of time, we decided to concentrate upon it. It is an ultra-smooth, ultra-white media, acid and lignin free, with a grammage of 285gsm and a calliper of 310 microns. After experiencing problems with the downloaded profiles, we set to and built a 729 swatch profile using Monaco Profiler Platinum. We chose Premium Semi Gloss Photo Paper as our media setting on our Epson 3800, using 2880 dpi with High Speed on, Black Point Compensation on, using Relative Colormetric as our rendering intent.

Initially the results were typical of this class of media, ie very good! In a piece of shameless self-indulgence we then tuned the profile manually and delivered a 1.56ΔE 2000 average error, so small that the errors barely registered on our normal graphs! (We really must stop this nerdy nit-picking, that's the second time we have smashed the accuracy record this week.) The errors were left about 50% better than those demanded by Fogra-GRACol for their contract proofing standard. The gamut volume was 875,754 and was right up with the leading group. The metamerism was 1.1 ΔE Lab (D65 to Tungsten at 50% grey). The Dmax was 2.22. The Granger Chart was much smoother off our higher resolution profile.