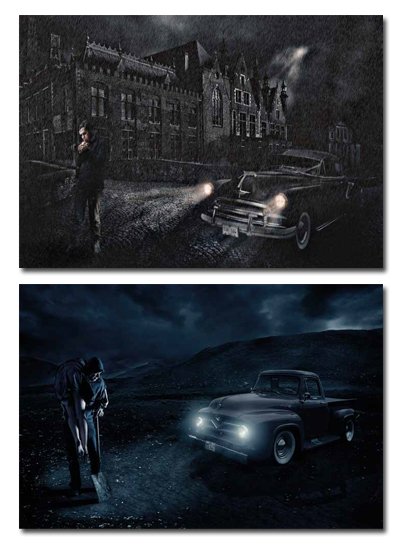 My images are a culmination of approximately two years' worth of photographic work and a lifetime of research. Inspiration has been drawn from many types of media, from Jack Vettriano's work to films such as the recent Sherlock Holmes. Most of the techniques used were discovered through extensive trial and error both in terms of the photography and the editing used.

Some of the images are shot for clients whilst, others the result of my passion. Although the project finished with 20 images there are actually many more that were discarded half way through their creation - it became obvious to me when a photograph wasn't going to work, unfortunately it sometimes only became apparent after days of editing.

Once the image was shot, my first port of call was to dramatically enhance the light source and the way it fell upon the subject/ surroundings, more often than not actually removing brightness in a dramatic way. 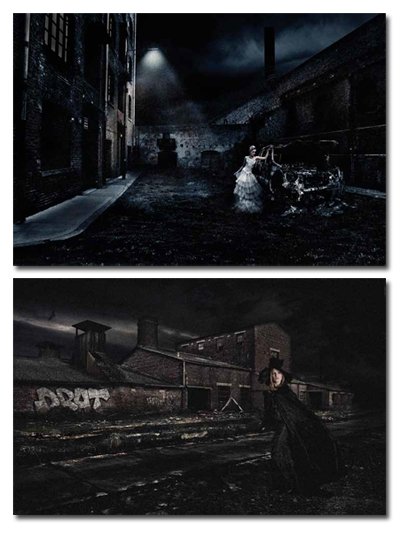 Some of the images tell a story, dark stories at that, but mainly the scenarios are left with open ended explanations. I did not set out to make a series of 'dark' images, in fact I didn't set out to make a set of images at all! Whilst spending a great amount of time looking for suitable settings in the East of London I could clearly see that many original features were untouched on so many dock buildings/pubs, etc, this started the gritty theme, which I just couldn't stop.

The characters that walk the streets, carry the bodies or hold the guns are all styled to suit their surroundings and tell the story. The way in which the subjects are lit also varies depending on the type of scene, from vintage cars to dim street lamps, their role in each image is vital. The light source adds so much to the mood of each image from showing up mist, to highlighting the rain.

Travelling around, researching locations, proved an interesting and sometimes daunting experience! A few of the old buildings were derelict and had been so for a long time, this was great for adding character but not so great for safety. Most of the images were shot in the UK with the exception of a couple which were photographed around Europe.