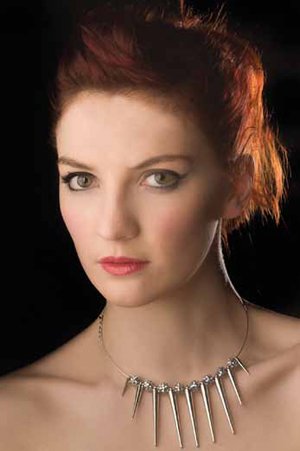 Our journey to Ireland was full of character. Almost like a blind escort, from Hull, to Leeds, to Holyhead, and across the Irish sea to Dublin - we were shrouded in mists and rains from A to B. Our luxury ferry company chose this week to be refurbished, leaving its perfectly capable, if somewhat more senior replacement to take us across the waters. Whilst the piles of rust-stained, paper sick-bags, lining the dining room windows were a little unnerving, the crossing was surprisingly pleasant. After landing, and having first interrupted the quiet Sunday afternoon of a sweet elderly lady whose house has an identical address to that of Mr. Podge Kelly, we finally met up with our tour manager/guide and set off to Cork.

The Maryborough Hotel, Cork, is honestly one of the most charming yet opulent hotels I've ever visited, I still regret not visiting their spa pool!

We were given access to the hotel's bridal suite for the workshop, and whilst I'm yet to decide what I think of the squashy bath, the decor of the rooms was a fantastic backdrop for John to teach in.

The Courtyard hotel in Liexlip, near Dublin, had a very different feel to Maryborough and offered its own charms. A slightly more modern complex, complete with its own waterfall and piano bar, it took the workshop in a very different direction, and the clearing skies allowed us to get outside for the first time on our trip.

Our next stop was The Dunadry hotel in Antrim for the Societies Mini Convention. This converted linen mill had the most amazing features preserved from its industrial past, creating an almost castle-like feel to it. There was a great turnout to the event as a whole, and John and I had the pleasure of presenting to a packed room. With little spare room to work in I'm amazed at the pictures we came out with, and we had such lovely feedback from people watching. As well as lots of new friends, it was a treat to catch up with the Joneses and a few other familiar faces from the January Convention.

Our final location was perhaps the one I was most excited about, mostly due to watching the film PS I Love You. Whilst I didn't get to see too much of the romantic side of Galway on our Valentine's Day workshop, the Connaught hotel gave as plenty of great opportunities to make some wonderful images. The on-site Thai restaurant was by far the most elaborate set all week and everyone had fun playing with the colours and light in there. And that was the hard work over - made really rather easy by the great support of Podge and everyone else along the way!

We then spent Valentine's evening in the company of Podge's lovely wife Therese who had baked us a gorgeous apple cake, the last piece of which I am savouring as I write. On our day of rest between the workshops and heading home, Podge introduced us to a spectacular location in Dublin. This house is such a hidden treasure. Through all five stories, and over every crumbling wall, floor, stair, doorway, window and ceiling, exposed strips and patches of history from the buildings years of existence. I have never seen two grown men more childishly excited and all the time in the world might not fulfil the building's creative potential, but the images that John and Podge came out with certainly give an insight into the wonderful world held behind that unassuming doorway.

On the morning of our departure, just to keep us on our toes, our replacement ferry decided it also needed a little break and so a minor detour via Belfast and Cairnryan, Scotland, took our modest trip through three nations, to a rather more respectable four! Our departure was further challenged by John's unusual servitude to the demands of the satnav which resulted in a 30-minute spiralling tour of the dockside M3 and North Street of Belfast in search of a particularly elusive KFC to reside in until finally boarding our ferry to nation number four.

So, many thanks to everyone who came on the workshops, we had such great company all along the trip and the images coming back from everyone are really top class.