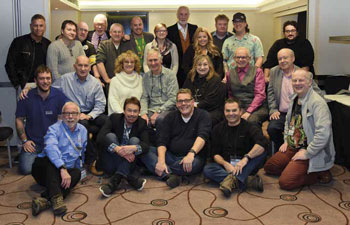 The Survivors: The 22 judges eligible for 16x20 finals judging after those with 'an interest' in any print were excluded from the process.

An occasional feature to introduce The Societies' Judges for MonthlyCompetitions, Photographer of the Year, Qualifications and the 16x20 PrintCompetition - this time around we show and name them all (well most ofthem).

The Judges used during the year:

Special mention must be made of Matt Neve and his printhandlingteam who worked tirelessly in the backgroundto keep things running smoothly. The ideal print handleris almost invisible but this does not detract from theimportance of what they do - unlike the judges, they do notget regular change outs!