To add to his talents Jon has a special ace up his sleeve that helps to get those award-winning images. It's not a new camera, or lens or Photoshop plugin that he thought might have been the answer to his prayers when he first started out. But The Extreme Wedding Photographer himself - Mr Richard P Walton LSWPP. Every Saturday, Richy takes time out from his work as a car and band photographer to work with Jon on his weddings. He's not the usual middle-aged, belly-a-bit-larger-than-normal, wedding photographer but brings a new exciting approach to weddings. Don't think Richy is the assistant on the weddings, he's far from it, he's a co-photographer and works as a team with Jon.

Think of a crème brulèe without the crispy topping, perfectly cooked new potatoes without the butter, a nice mug of coffee with 1half sugars and not the usual 2. All perfect meals as they are but with that little extra, it adds something that makes it complete. 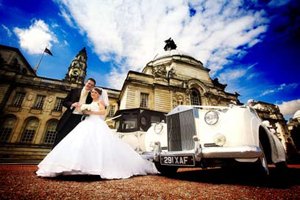 Jon believes that one answer to his success is his team work with Richy. No doubt that Jon can achieve the results without him and has on countless times, but when working with Richy, it takes a little of the stress away and adds that extra sparkle. Jon's approach is primarily to shoot for the bride, give the customer what they want first and make them happy before you think about anything else. He very much advocates the phrase 'shoot for dough before you shoot for show'. His job is to get the bog standard images in the bag and the customer happy before he thinks about awards and panel pictures. Whereas Richy loves to remind Jon that you should 'Shoot for show before you shoot for dough' reiterating 'once you've learned to shoot for show the dough will surely come'. He has a point but Jon would rather see the bride happy with her boring, looking at camera 10x8 for Grandma, than a bride pondering over whether she really likes the photo of her with her husband bending her so far back that they had to cancel the honeymoon due to the amount of physio required. Despite their bickering banter, it does work well and has made for some extremely happy brides and some fantastic images. While Jon is working hard to go through the list of groups and getting the main job in hand done, Richy is usually looking for locations for the romantics that he can adopt his unique style to. This usually means Richy finding a tree to climb so he can get a nice overhead view of the bride and groom or some funky background to position them against. All Richy's talk about how he shoots for himself and not for the bride is a little misleading - on asking him why he was climbing the tree to get 'that' shot, he states quite clearly that "you have to give the bride and groom something for their money". All brides have been to weddings before but never seen a photographer make the effort to climb a tree, get on the roof of a car or balance on a railing just to get a better angle on a shot. This approach has made Richy quite a topic of discussion on weddings and has resulted in many guests taking photos of him and forgetting about the bride. Richy explains, "Wedding photography is an expensive purchase to most people, no matter how much you pay, and you have to give the brides value for money. If you make an effort, the brides remember that. Although I do some of my more extreme stunts for my own amusement, weddings can get boring sometimes! And Uncle Bob ain't gonna be shooting over your shoulder for that one!"


Please Note:
There is more than one page for this Article.
You are currently on page 2 Contact Jon Jenkins